Living in the Clouds

Imagine a world where your office space is server free, where you can work from anywhere and where every employee uses the same program. According to a panel of experts brought together by Rezonance in Geneva earlier this year, we will all be going ‘up’ by 2015. Many businesses have already transitioned to the virtual world, but others question its sustainability. 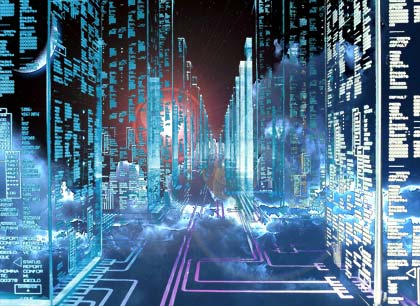 What is Cloud Computing?

Google is the current leader in Cloud IT and defines Cloud Computing as ‘hosted applications and platforms built on shared infrastructure for Cloud computing and delivered via a web browser.’ To put it more simply, we can use the term SaaS (Software as a Service) which expresses the idea of renting an IT service rather than owning it. In other words, if you’re using Gmail, Facebook, Amazon, Twitter or even a Playstation, you are already in the Cloud! How did you get there? When you use Facebook for instance, your data is housed by Facebook. You are just renting – in this case at no cost – a service that allows you to work on and share your data on software common to all users. You can then access it from anywhere using an internet connection, a web browser and a hardware device such as a laptop, an IPad or a mobile phone. Ian Prince, Co-Founder and CTO of In Extenso, a provider of Cloud Computing solutions, estimates that 80% of our computing is already in the Cloud – for businesses and individuals.

Louis Naugès, founder and President of Revevol, the first consulting company specializing in web 2.0, is an IT expert and Cloud Computing pioneer. Through their partnership with Google, Revevol has migrated 150 000 accounts to the Cloud in three years. Naugès is a ‘CCE’, or ‘Chief Cloud Evangelist’, to use the words of Bruno Savoyat who mediated the conference. In the 1980s, he invented the word ‘bureautique’, or ‘office automation’. According to Naugès, there are three steps to accessing the Cloud:

1. The Network: ‘We are currently in the third generation of networks (HSPA). But there is an even newer generation called LTE (Long Term Evolution), which is already available in Sweden, Germany and other countries. Morgan Stanley issued a report stating that LTE currently starts at 150 Megabits and will reach a Gigabit in 2014 – wireless of course! Network coverage is expanding very fast and it will soon be accessible worldwide – even as Wi-Fi in planes! You can even find LTE smart phones today. The cost of accessing ultra fast networks is only $ 60 per month on average. And Google makes it free for universities!

2. The Server: we are reinventing ‘mega machines’. Twenty years ago, IT was centralized. Then we decentralized it and now, we are going back to basics! But most of today’s IT retailers will not stand watching their market share fade away; so they invented the word ‘private Cloud’. The bad news is that the Cloud is private by definition! Indeed, you are renting a private space on a shared server. Of course, some might raise the issue of data security, but is it not enough to know that your data is being stored next to Google’s? It is estimated that Google has 2.4 million servers, stored in approximately 40 data centers with each container housing 1000 to 2000 servers. Microsoft’s data centers cost $ 1 billion each. To compare, the average cost of a modern factory is $ 600 million. So, big players have to put $ 1 billion on the IT table yearly if they want to stay in the game – this is an industry! With these data centers, you have all the power you need when you need it.

3. The Cloud Access Device: this is the browser, which is essential to access the Cloud and be mobile. In other words, IT Managers who order non-web systems should change jobs! We use more mobile devices than ever. In the next few years, there will be no more browser monopoly. Instead, there will be only a handful of providers competing against each other. In Switzerland, Firefox has already over taken Explorer in popularity, and Google Chrome is catching up fast. In 2006, there were more mobile devices than fixed ones – the PC – personal computer – era is ending! Let’s use the example of the new Motorola Atrix Smartphone, which illustrates well how one device will be used for everything. You just plug the mobile phone into your TV, computer or any relevant device. You can access your information from wherever you want by using the Cloud.’

Currently, there are approximately 1 billion people using MS Office worldwide. Naugès says there will be none left by 2020. This means 100 million users a year will be moving to the Cloud. Naugès adds ironically: ‘(That’s a) pretty good potential market for Revevol, isn’t it? We’ll do fine with just 10%’
According to Thomas Grüderich, Mid-Market Sales Manager at Google Apps for Business, the current trends impacting business are innovation, collaboration, mobility, and the social dimension (50% of businesses will be micro-blogging by 2012). Since Cloud computing features these four aspects, businesses will naturally migrate towards it. ‘We’re moving away from very complex IT into a mobile environment, where it doesn’t matter which device you use because everything is going to the Cloud. You get used to discs and hard drives, but they might not be the most efficient way to work. At Google, we were actually born in the Cloud and saw the potential of developing it. Early on and bit by bit, we bought companies that contributed to this mission. In Google we believe 100% in our web vision (Chrome, Chrome IS, Android). We’re still at the beginning, but we’re moving really fast and remember it is always user driven rather than technology driven. Today, 80% of IT costs are wasted on collateral operations such as keeping lights on, running servers and maintaining systems.’
The question for Grüderich is why people don’t use that money to pay for a Cloud subscription model. According to him, ‘It would cut down on the maintenance work that prohibits you from being more productive. It would also be much more efficient to work on the same document at the same time! Why are we still sending big attachments which lead us to say things like, ‘Johnny forgot to update the document! Thomas did not add his input here! Laura was sick!’. It’s amazing to see that Motorola used to take several months to publish their annual report, whereas it only took them 3 days using Google Apps!’
If Google had a slogan for its Cloud solutions, it would probably be ‘Focus on your business, not your IT’.

Advantages of the Cloud 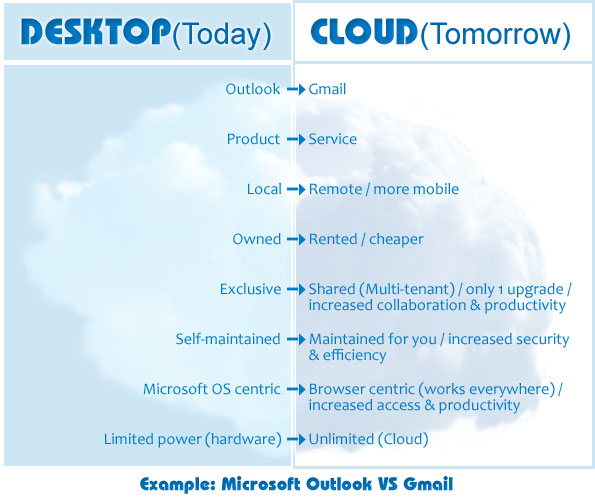