An artist in Shanghai

“As a kid, my mum would let me draw on the walls to calm me down” says Hangfeng, a Chinese artist living in Shanghai who deals with global changes and cultural transmutation. His repertoire spans drawing, painting, paper-cuts, photo, video, installation as well as performance, and he enjoys merging concepts and mediums like an alchemist. For example, he uses ice-cream to sculpt a glacier or takes plastic bags that he loosely pins on a wall. 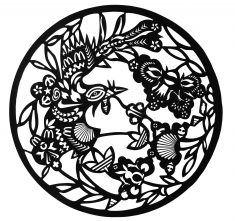 Hangfeng first studied traditional Chinese art, then obtained a degree from the Fine Arts College of Shanghai University in 1997. In parallel to his studies, The Chinese artist worked as a freelancer decorating different venues such as clubs, hotels or even malls. He was earning 5000RMB (720CHF) for a three weeks’ job which at the time was above average, which was about 500RMB (73CHF) a month.

After graduating, Hangfeng worked a few years as a graphic designer for an advertising company before quitting his job in 2005 to live from his art. At the beginning, he continued to do freelance work for several publications, China and Europe-based magazines. That experience gave him inspiration for his “Logomania” series, patterns created from famous brands, using different material. From April to July 2016, the artist was in Geneva doing a residency at the Embassy of Foreign Artists. His ongoing research on “invasive species”, such as Mandarin ducks, was outlined in a presentation and screening event called Shaping in Between on 24 June, at the Coopérative Ressources Urbaines.

“Censorship does not stop art, freedom does”

Chen Hangfeng is an artist, not an activist. In his view, “it is possible to express without protest.” He doesn’t feel like his freedom is restrained, though he was on one occasion confronted with the “Cultural Police”, the entity in charge of applying the censorship rules. An officer gave him a phone call and asked him if he was “available for a tea”. The matter was regarding his installation called Cannot Help Them (bubble city, bubble life): a cage surrounding a machine that blows bubbles, which burst when they come in contact with the cage wires. The artist explains that the bubble machine is “a sort of life support system for dreams. The work uses humor to create a tension between ideals and realities. The bubble has the intriguing property of reflecting our world in a small round idealized shape but also conveys a sense of speculation, fragility and emptiness.”

The police officer and Hangfeng discussed his creation but there was no consequence. On the other hand, one of his friends was not as lucky: he was sentenced to one month in prison for depicting President Xi Jinping’s expression on the toilet.

Control is strong and some periods are more severe than others, such as during the Expo 2010 Shanghai or since the investiture of the new President.

If censorship in China limits freedom of ideas, when it comes to getting a message across, code language involving metaphors and tricks has developed.

On his various trips to the West, Chen has noticed that the total freedom of speech and ideas is not used to its fullest potential. On the contrary, he mentions his slight disappointment when meeting people in Europe who don’t make the most of it. On several occasions but particularly while in Geneva, Hangfeng met artists whose work was “quite boring”, and whose attitude was “quite lazy”, as if when you acquire freedom, you don’t know what to do with it, unlike when facing a government that applies strict regulations that triggers a sense of rebellion and willpower for action.

For Hangfeng, an artist today is the incarnation of an ancient philosopher, an artisan and literati. That idea is based on the thought in China that a cultivated person is a whole, unlike in the West where we tend to separate for example a philosopher from an artist. With this in mind, Hangfeng reflects on China as a country and admits quite freely that “the Chinese government is bad”. There is too much money and corruption involved. His view is that intellectuals in China are not taken seriously and he is upset to see people with a lack of knowledge run the country. He also sees the effects of money on the younger generation that has become selfish and irresponsible.

On the brighter side, he believes that there is a “traditional wisdom” as well as strong values in China, and in particular in Taiwan, often seen as closer to Chinese tradition than Mainland. Culturally, Hangfeng is glad to see a renewal of interest in history and the use of old expressions. He concludes by sharing that literature, art, design and food are things that make China an amazing place to discover.

Hangfeng’s story reveals a nuanced picture: despite the terrible mishandling of some artists in China, others are doing their work in a relatively peaceful way. When asked about his present career, Hangfeng says “I’ve been lucky. With the booming of Contemporary Art in China, I was in the right place at the right time”. Even though it is essential to keep in mind the artists-activists who are jailed for not respecting the censorship rules, there are cases in which being an artist in China is interesting and fulfilling. Thanks to Chen Hangfeng’s honest contribution, it is the opportunity to discover what a Chinese artist thinks of censorship and freedom as well as some current aspects of China, including an introduction to values in Modern China. But overall, it raises the question of art in the West. Is total freedom indeed paradoxically an obstacle for in depth and interesting art?

Journalism…corporate communications…marketing support. But above all, writing. This is what I love. With this skill  and my print and online experience, I can communicate the news or translate your ideas into words.  Whatever the message, I can get it across to the right audience in a clear and concise way in French or English!

This love for writing is only matched by my passion for China and for speaking Mandarin. Any opportunity I have to bring these three things together, I take it!