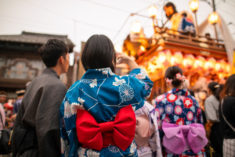 On the 3rd of November, Japan celebrated the annual Day of Culture or Bunka no Hi. This was an opportunity to pay homage to academics, artists and actors contributing to the cultural influence of Japan.

Originally, this festival was held in tribute to the emperor Meiji’s anniversary, who was born 3rd of November 1852. It continued to be celebrated until emperor Meiji’s departure in 1912. After a fifteen year hiatus, the festival was reintroduced in 1927 in honor of his memory. It began as a Day of Culture in 1948.

On this occasion, it was to celebrate the new Constitution by Emperor Hiro Hito to the Japanese people. This has been written at the instigation of the administration put in place by the allied forces of occupation. It should be noted however that the Constitution has its own day on the 3rd of May.

Traditionally, it is a chance to enjoy the numerous events organized by public and private institutions. Parades and fair also take place on this occasion.

Since 1937 the prestigious Order of Culture has been awarded on this day, in the Tokyo Imperial Palace. Among the recipients are the novelist Yoshikawa Eiji and the three members of the Apollo  11.

An interesting fact is that the Culture Day is statistically one of the best days of the year. According to the Japan Meteorological Agency  it only rained in Tokyo three times on the 3 November between 1965 and 1996.

A Door to Switzerland: Swiss Artists in Japan