The credit crunch eats up time A recent survey by just-eat.co.uk reveals more and more emp

130 national and international speakers and more than 1500 participants were present at this year’s SpoBiS 2013 held at the CCD Congress Centrum in Düsseldorf, Germany. The 17th edition of the Sports Business Summit – the biggest sports business congress in Europe – saw an impressive number of all kinds of representatives from the world of sport presenting, discussing and networking like real champions over two consecutive days (for further info www.spobis.de).

From an organizational point of view, there was a slight modification. Instead of the established duo of organizers they had had in the past, SPONSORs from Hamburg, the leading German-language producer and provider of information in the sports business industry (for further info www.sponsors.de), took over as the sole official host. At the same time, Swiss independent networking platform ESB Europäische Sponsoring-Börse from St. Gallen (the official organizer of the annual event series Sport.Forum.Schweiz in Lucerne, for further info www.esb-online.com) gained premium partner status. These were small changes which had no negative effect on the high standards which SpoBiS sets.

The place to be for everyone involved in the sports industry

Dedicated, sports-minded people from clubs, leagues and associations, the advertising industry, sports rights holders and event organisers, media companies, law firms, service providers, consultancies, marketers, architects, construction companies and sports venue operators all gathered to learn more about the latest industry trends. The motivations to join such a highly-professional sports business event are multifaceted and famous people from the world of sports stated their views of this event:

“A good opportunity for making contacts and entering into discussion with sponsors and partners. This is not least why the SpoBiS has become so well established”

“The SpoBiS is one of the most important events in the German-speaking world. It is therefore a natural platform on which to present ourselves.”

But German skills were not mandatory to be able to follow a wide range of sports-related content at this year’s Sports Business Summit. An English-speaking interpreting service via headphones was available for all international guests making sure that the programme could be easily understood and enjoyed.

V.I.Ps on the Main Stage

The main stage offered interesting topics and discussions with protagonists from the German football scene primarily setting the tone. Martin Kind, President of Bundesliga football club Hannover 96, kicked off the programme there on the first day, followed by a unique constellation of leading German Bundesliga football figures. On the one hand, there were Wolfgang Holzhäuser (Management Spokesman, Bayer 04 Leverkusen) and Thomas Röttgermann (Managing Director, VfL Wolfsburg) as representatives of ‘company clubs’, those which receive all of their funding from corporations.  On the other, Heribert Bruchhagen (Executive Chairman, Eintracht Frankfurt) and Hans-Joachim Watzke (Chairman of the Board, Borussia Dortmund) were there as representatives of traditional clubs.  Both groups discussed what unites and divides them in a very entertaining and frank manner.

The second day began with a presentation from former German national goalkeeper, Oliver Kahn, who talked about his professional path after the end of his playing career and Christian Seifert, Chairman of the Management Board of the German Football League (DFL), explaining how the DFL wishes to enhance its global added value. Oliver Bierhoff, Manager of the German national football team, was the last person to enter the main stage. One of the topics he talked about related to UEFA’s plans to host the EURO 2020 in multiple European countries, including 12 different stadiums. In addition, one city will experience the honour of hosting both semi-finals and the final match. Concerning a possible German application for either the UEFA EURO 2020 preliminary round or the final round (semi-finals, final), he tends to favour going for the last matches of the tournament:

“I am a self-confident person with the belief that the German National Team can make it to the final games of the competition. But in general and due to the international network of Wolfgang Niersbach (President of the German Football Association, DFB), I am pretty sure that Germany will be hosting games during the UEFA EURO 2020”.

One of the highlights of SpoBiS 2013 was definitely Ralf Rangnick’s presentation about his double role as the Sports Director of Austrian first division football team Red Bull Salzburg and fourth division football team RB Leipzig in Germany. In the course of explaining the playing philosophy for both teams, he left the speaker’s podium and used the stage to deliver an impressive speech about tactics and the mechanics of play in modern football. That was basically the end of his presentation and the beginning of a professional coaching demonstration from “football professor” Ralf Rangnick. 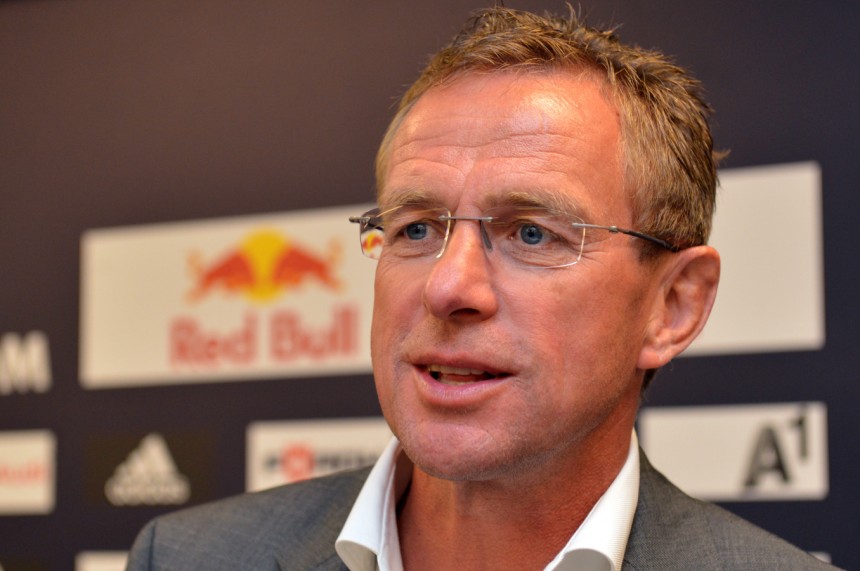 Since June 2012, Ralf Rangnick has been the Sports Director for both Red Bull Salzburg and RB Leipzig

But the main stage did not only feature football related content. Michael Dolan, Chairman & CEO IMG Worldwide, the largest sports marketer in the world, talked about IMG strategy in Europe, especially referring to the German market. Dr. Thomas Sedran, the deputy chairman of Opel’s management board, was also present at the SpoBiS for the first time. He proudly announced the return of the Rüsselsheim-based automotive manufacturer to sports sponsoring after a ten-year break and explained from an Opel perspective why sport is a great means for sponsoring activities.

This year’s SpoBiS programme had a huge emphasis on football and the 15 special interest forums also offered football-related content. Yet, the main focus within those forums was to present and discuss a whole series of aspects of relevance to everyday sports business activities. The broad high-quality presentations of topics included ticketing; sponsorship marketing and activation; hospitality at major events; sports policy challenges in the wake of the German parliamentary elections in 2013; the impact of the liberalisation of the gambling market; and successful market research in sponsoring. On average, each presentation within a forum lasted 20 minutes and was conducted by professionals and representatives from organizations, clubs and associations such as Milka, Deutsche Telekom, Beko Basketball Bundesliga (BBL), Jack Wolfskin, Audi, Hugo Boss, Sport+Markt, German Olympic Sports Confederation (DOSB), Google, Kia, Sky, Eurosport, FC Barcelona, Smart, Facebook, Twitter, EA Sports and MAN, just to name a few.

To emphasize how important the role of sports within the marketing-mix can be, theEuropäische Sponsoring-Börse (ESB) had the idea of initiating the ‘Sports Marketing Award’ back in 1999. Operating on an annual basis and as part of the official SpoBiS programme, this year’s award ceremony saw three finalists competing for glory for what is known as one of the most coveted awards in the sports business industry. Hans-Willy Brockes, President of the ESB, delivered the ceremony speech and finally handed over the ‘Sports Marketing Award 2013’ to Goldene Generation & PUMA for their introductory campaign concerning the launch of Borussia Dortmund’s new football jersey. Second place went to Webradio FC St. Pauli FM – The Beat of St.Pauli with the Volleyball-Sponsorship of BERLIN RECYCLING being ranked third in the competition.

In contrast to the ‘Sports Marketing Award’, the ‘SPONSORs Honorary Award’ is not given every year. The trade magazine SPONSORs, only recognizes someone if it particularly feels that a person has had an outstanding impact within the world of sports. Herbert Hainer, CEO at Adidas AG since 2001, celebrated 25 years of service last year and was conferred with the ‘SPONSORs Honorary Award’ at SpoBis 2013. The “three stripes man” secures high-profile supplier and sponsorship deals for the sports industry and is one of the leading financial backers of global sport.

Herbert Hainer (CEO Adidas AG, on the right) happy after having received the ‘SPONSORs Honorary Award’

Just a couple of days after the successful hosting of the Sports Business Summit 2013, SPONSORs announced the dates of the upcoming 18th edition. Like this year, the event will take place in February (3rd and 4th) and people who want to broaden their horizons with the latest news and trends from the world of sports, will have the opportunity to take part in Europe’s largest sports business congress again in 2014. For a fourth time, the CCD Congress Center in Düsseldorf, Germany, will be used as the event location. To conclude with the opinion of Christian Seifert, President of the Executive of the German Football League, DFL: “It’s worth being there.”