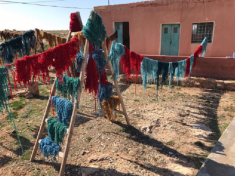 IKEA was one of the leading companies, if not the first, to make sure the private sector has a seat in the humanitarian sector.

As innovative as it has always been, IKEA announced in November 2016 yet another brilliant partnership project with local non-profit organisations and associations in Jordan to help Syrian refugees. This will not only help them financially, but it will also help them to integrate the host society and make them feel proud of their skills.

IKEA is aiming to create job opportunities for 200 people, and there could be a possibility the number might increase up to 2,000 people in the future. To start with, the initiative will be launched in 2019, however the first group will start working in September 2017.

The target market for these products will be the Middle East retail countries, such as Jordan which already has free trade agreements with these countries in the region.

IKEA’s new plan to sell rugs made by refugees

IKEA to start purchasing from Jordan

Made by refugees: IKEA’s landmark plan

My career is grounded in outreach and communications in the humanitarian sector, mainly in the Middle East and North Africa. The first involves designing and implementing humanitarian projects for international organisations; the second is communicating that action to stakeholders. I am always up for new challenges in English, Arabic ,Somali…and even français!
Whatever the challenge I face though, it is essential that my work preserves the human element. So, I am now exploring innovation and the impact of using social media on humanitarian action in emergency situations to make our actions more visible to the public.