Faced with government plans to cut public sector pay by 5% from June this year, Spanish pu 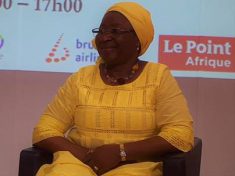 As part of the Book and Press Fair 2018, GBN had the chance to meet the remarkable Monique Ilboudo.

We discussed about her devotion to improving the women’s rights in her country, Burkina Faso.

Monique Ilboudo is the first female professor of private law at Burkina Faso’s University of Ouagadougou. She started her activism in 1992 thanks to her regular column “Féminin Pluriel” in the country’s daily newspaper, L’Observateur Paalga.

Beyond being a committed human rights activist, especially women’s rights, she is also a distinguished figure in francophone African literature. She was awarded the National Grand Prix for her 1992 novel Le Mal de Peau (Le Serpent à Plumes, 2001). Her other books are Droit de cité, etre femme au Burkina Faso (English: Freedom of the City, being a woman in Burkina Faso, published by Remue-ménage, 2006) and the recently published Si loin de ma vie (Le Serpent à Plumes), which was launched at Salon African in 2018.

A born activist: when and why?

The obvious first question is to ask, “When did you decide to commit yourself to the defence of women’s rights?”

Ilboudo she explains how she was rebelling during her childhood, sensing the disparities that existed in her family. “There were things that shocked me, what was happening in my own family, in relation to my brothers and cousins. They were freer than I was. They could walk around; go outside while I had to stay at home.”

Later, while studying law at university, she began to write about this issue. The editor of L’Observateur Paalga offered her a weekly column. “He challenged me. He wanted to see if I was literally able to write what I was talking about it.”

Later, she was appointed the country’s first female minister for the promotion of human rights, and then became the ambassador to the Nordic countries. She resigned her post in 2015 to focus on teaching law at university.

Monique Ilboudo’s future projects centre on her two passions; teaching and writing. Currently, she does not have any official government function. And she has never been a card-carrier for any party. But she willingly accepts the roles that the government proposes to her to represent women and to be a role-model for women in Burkina Faso. Her goal is to pass on to them her knowledge and democratic ideals.

Monique Ilboudo is full of hope. Change is underway, but not as fast as she would like. What is positive is the increasing number of girls who are attending college. “This is where there is hope. Twenty years ago I started teaching and now I see more and more girls at the University.” This is despite the fact that marriage – in the eyes of girls and their families – remains more important than school. Across the country, however, women have greater access to education.

There is, however, still much to do.

Although there is new legislation that tackles violence against women in Bukina Faso (passed in 2015), the problem still persists.

And there are, unfortunately, still men who do not like women with a high level of education. It seems that it makes the men feel inferior. To add to the general state of prejudice against women, if a girl does not get married, she will be looked down on by society.

Monique Ilboudo says though that women must work with men to change society.

Are teachers ready to deliver the right message? This is not easy, Ilboudo emphasises, stating that there is a lack of female teachers. She was the first female university teacher in the country. “I was alone among the men. They treated me badly, they teased me. However, today, a dozen women teach. ”

Ilboudo ‘s profile though has been a source of inspiration for the country’s girls. The more women there are to encourage girls to be unafraid of achieving their dreams, the easier it will be for society to change.

“Twenty years ago, it was said that there were more important rights to protect. Namely, democracy. First of all, democracy and then women’s rights.” A change in society, however, has led to a greater debate that women’s rights are human rights, and that they are essential to democracy. She is proud to have fought with other women and helped change this mentality:

In 2017, the UN Committee on the Elimination of Discrimination against Women noted in its concluding observations the persistence of discriminatory stereotypes against women in Bukina Faso. Women in the country are still highly vulnerable to sexual and gender-based violence; early and forced marriage; human trafficking; and forced prostitution.

There is also a persistence of female genital mutilation despite the fact that the government introduced a national plan to eliminate the practice by 2020. There is also a national strategy to end child marriage by 2025. The UN reported that in rural areas, 92 percent of girls are married before turning 18.

For Ilboudo, this state of affairs is linked to education. If there are no schools nearby, however, parents are reluctant to send girls away to study. The mentality, especially in rural areas, is that parents value daughters solely for marriage.

Another difficulty in rural areas is the lack of adequate schooling structure. “We have to fight so that there are more schools and less expensive.” Indeed, families prefer to pay for schooling boys rather than girls. It is important to continue to push for the education of girls and reject discrimination and violence against them.

Ending female genital mutilations is one of Monique Ilboudo’s big fights. The mentality is slowly changing, but advancement depends on increased education across the country.

In Burkina Faso, female genital mutilation has been a crime since November 1996. There are many though who feel the practice is part of their cultural identity, and if a girl has not been circumcised, it is as though she is from a different ethnic group. For Monique Ilboudo, the only key to change:

Although there has been a decrease in the official number of young women who have had forced female genital mutilation, part of this decrease, it is thought, is because of fewer people admitting to the activity. To defy the law, the reality is that many people cross the border to countries that do not yet have legislation prohibiting genital mutilation.

In urban areas, however, the practice is becoming less frequent.

Ilboudo continues to emphasize that the more educated and sensitized women are, the more they will be able to combat inequality and violence.

Although Ilboudo is a fighter, she remains realistic: “The problems of society will not be diminished from one day to the next. It changes slowly.”

“We must remain attentive, we must continue to fight. I feel like boys are starting to respect girls. We are all here to help move society forward. Rights must be respected.”

The change process is slow but it is underway.

I am a human rights specialist with eight years of international experience with a passion for children's rights, migration procedures and migration law. To an organisation, I bring project management knowledge coupled with excellent communication and administrative skills. I have extensive experience in researching international and criminal law, and have an alternative dispute resolution certification.