NADIA MURAD: BEHIND THE HUMANITARIAN ICON 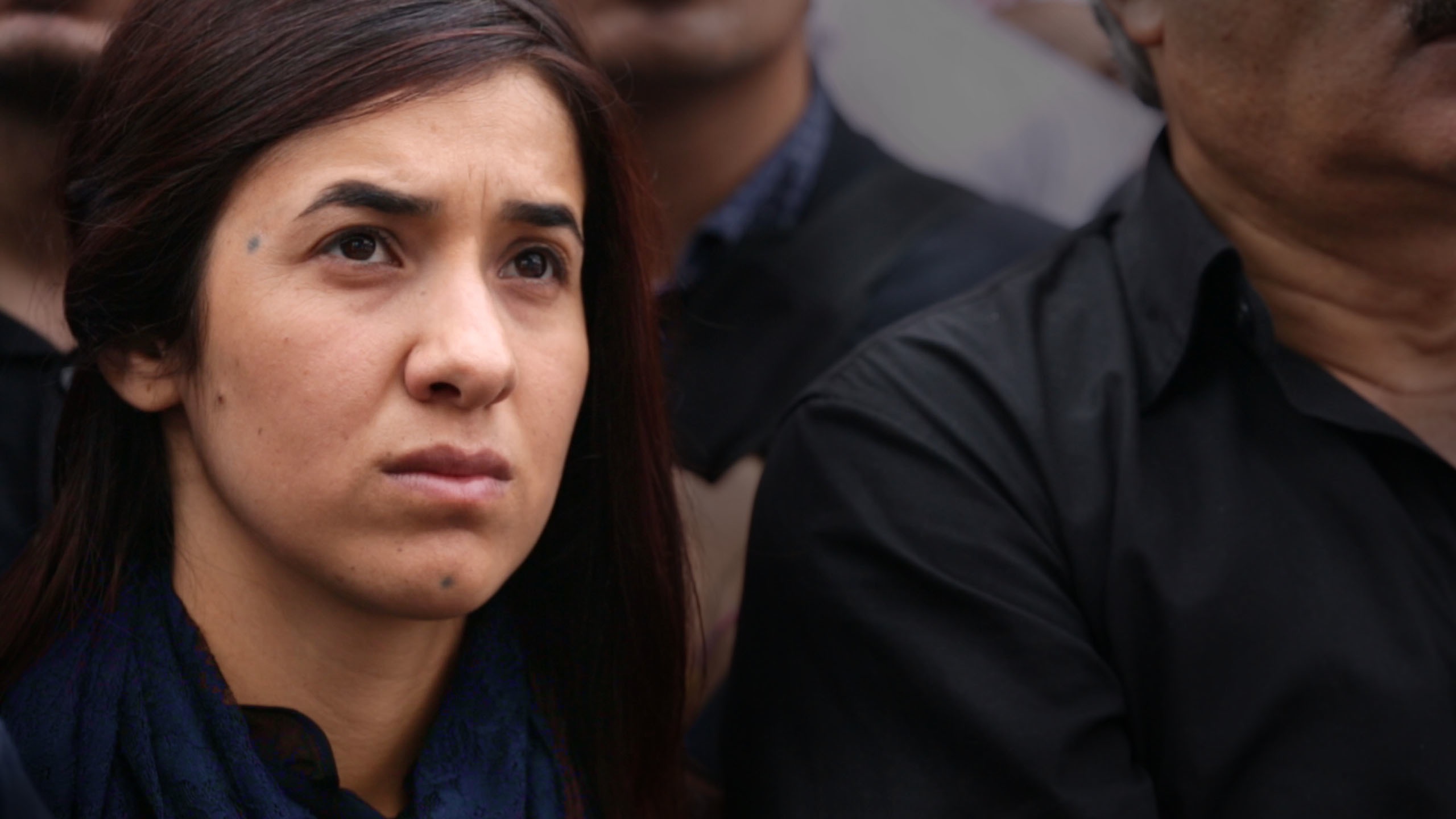 Nadia Murad, a 2018 Nobel Peace Prize winner, survived genocide and sexual slavery perpetrated by the Daesh. With the help of lawyer Amal Clooney, she is seeking to raise the international community’s awareness about – and therefore end – the use of sexual violence as a weapon of war and armed conflict.

The documentary “On Her Shoulders” follows the questions and doubts of this 23-year-old activist, and won a prize-winner at the 2019 FIFDH (International Film Festival and Forum on Human Rights) in Geneva.

Her story, their destiny

Nadia Murad was born in 1993 in the village of Kocho, near Sinjar,  largest Yezidi city in northern Iraq.  The Yezidi are a minority among the Kurdish people.

Nadia Murad’s tragic journey began in August 2014 when Sinjar was attacked by Daesh jihadists. For the latter, the Yezidi religion (a mix of both Islam and Christian), must disappear at all costs. Hundreds of people were killed; thousands took refuge in the mountains and others were taken captive and subjected to slavery and abuse. Nadia Murad was held captive at the age of 19 in Mosul, Daesh headquarters, until she escaped.

The young girl then contacted an organization that helps the Yezidis allowing her, in September 2015, to join her sister in Germany. Her story attracted the attention of human rights lawyer Amal Clooney, who gives her international visibility. In December of the same year, Nadia Murad testified before the UN Security Council, accusing the Daesh of genocide.

In the documentary film “On Her Shoulders”, directed by Alexandria Bombach, Murad becomes a United Nations Goodwill Ambassador for the dignity of victims of human trafficking. She stresses that it is not her story that is important, but that of her martyred people. Like many young girls her age, she only wants a peaceful life, dreaming of owning a hair salon or a future as a seamstress.

Installed in Germany, she is still involved in a campaign to “push for justice for the Yazidis against ISIS members and also to rebuild Sinjar, making it safe, and it’s just been an endless amount of things that she’s trying to accomplish”, explains the filmmaker in an interview.

As a symbol of moral and emotional outrage at suffering, she wrote an autobiography in 2017, “The Last Girl”, accompanied by the desire to “be the last girl in the world to have to tell such a story”. Despite herself and with resigned consent, Nadia Murad attained the status of activist and martyr of a cause. Adored by her own people, she provides an incredible horizon of hope. The film ultimately questions our insatiable, troubled and ambiguous compassion-fascination for what survives and suffers, which can be a convenient brake on concrete, long-term action.

“On Her Shoulders” highlights her daily routine of campaigning, a kind of exiled vocational statelessness – in the UN in New York, Canada and Germany – making carefully timed speeches, attending formal events and seminars, listening patiently to interpreters, holding back her tears and enduring questions about her experiences from TV and radio hosts.

During a private talk, a member of the Canadian Parliament tells the young woman that her mother would like to adopt her. This admission causes Nadia Murad a deep uneasiness. She is at all times accompanied and protected by Murad Ismael, the director of the Yazidi charity “Yazda.” 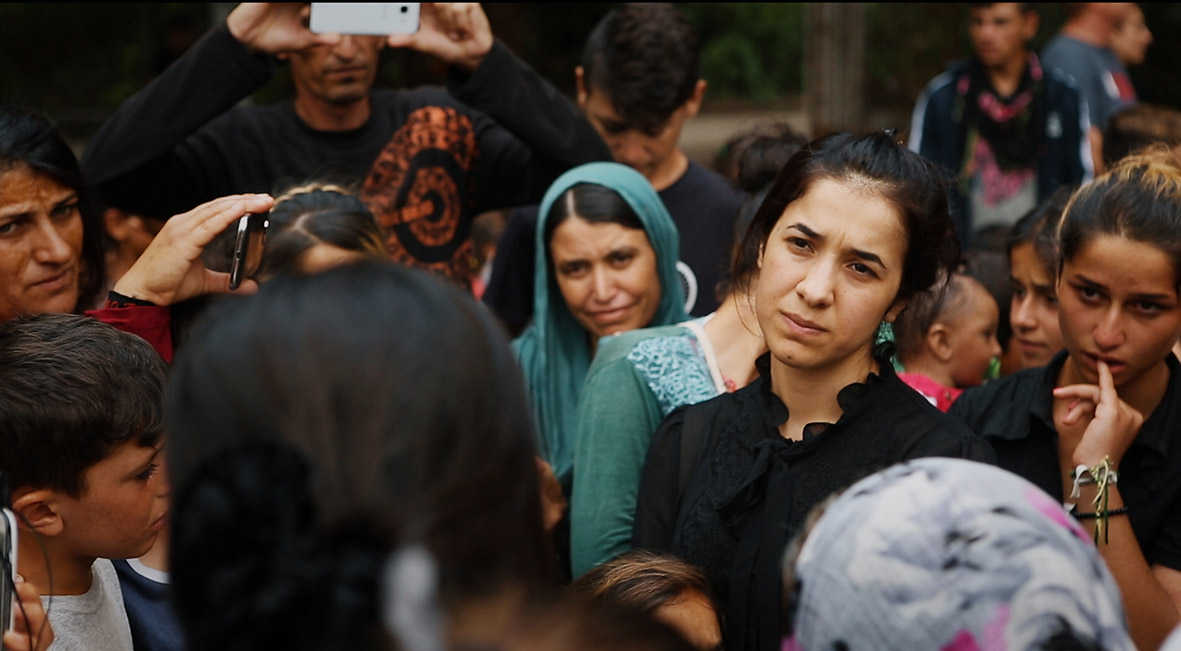 For a right to life

At the United Nations General Assembly in New York, she gave a speech of rare eloquence and sobriety on behalf of all refugees desperately seeking protection and asylum. She explained that, “Today I want to send you a message from all survivors and refugees around the world. It is you who can bring hope or create suffering”.

Nadia Murad adds, “This life was not only created for you and your families. We also want life and it is our right to live it. If beheading, taking women for sex slaves, raping children, and the displacement of millions of people does not affect you, when will you move?” These words are of universal value to many humanitarian tragedies around the world.

Today, most of Daesh’s former slaves are struggling as they live in refugee camps. While the lands of the Yezidi are now completely free from their jihadist oppressor, most of the women are unable to return home. The reconstruction of Sinjar, where 70 percent of the buildings were destroyed,has stalled for the past three years due to the lack of funding.

As a professional in communications and public relations, I am adept at promoting cultural activities, productions and events using the most appropriate tools. I create links between clients and target audience.