DETAILS
UK: Recycling company gets 200 back to work 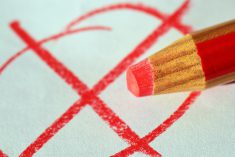 Although famous for the role that Protestantism had in shaping the city, Geneva is going to the polls on Sunday to vote on local laws that forbid any religious representation in state institutions.

The current law, referred to as the laïcité or secularity laws, states that all branches of government should be secular and neutral from religion.

The biggest disagreement, however, stems from rules concerning what public officials are or are not allowed to wear at work.

Currently, the law states that when in contact with the public, public officials should not show any outward signs of religious affiliation. This includes wearing things such as crucifixes and hijabs.

Some support this law, believing that religious symbols or religious clothing at work lets religious affiliation infiltrate into politics. The major Christian churches support these laws.

Others believe that the current law is arbitrary and discriminatory, and has been criticized by the Greens and Islamic groups.

Religion rarely features in referendum questions in Geneva. This will be an interesting one to watch.

After many years working in hospitality , an area well known for people with many skills , versatile capability is a must ! the pleasure of solving issues in other to bring full satisfaction to clients and company is still authentic and the energy to it is absolute.