Sergio Marchionne passes away at 66 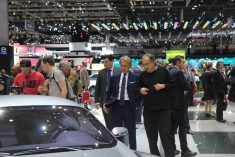 Sergio Marchionne, a standout among the automotive industry’s CEOs, has passed away at the age of 66 following complications from shoulder surgery.

As the CEO of Fiat Chrysler Automobiles, he managed to bring back life to companies that were struggling to survive. Known for being a ruthless workaholic, his strategies proved effective, as he was able to turn Fiat’s fortunes after taking on the role of CEO in 2004.

He wasn’t a man afraid to speak his mind; going so far as to say that the Jeep Commander – a Chrysler Group product – was “unfit for human consumption.”
Turning around struggling companies was truly one the greatest talents Marchionne had. For example, in 2009 Jeep had sold around 320,000 cars, but is expected to sell 1.9 million this year.

Marchionne had planned to retire in April 2019 but left his position abruptly after his health deteriorated, and was admitted to a hospital in Zurich where eventually passed away. The Head of Jeep, Michael Manley, will succeed him.