Employers are showing signs of regained interest for employment, but stay cautious about f

DETAILS
Should You Ever Lie in an Interview?

How else can you explain those awkward points? Honesty is generally the best policy. If yo

Should factory deaths spell the end for CSR? 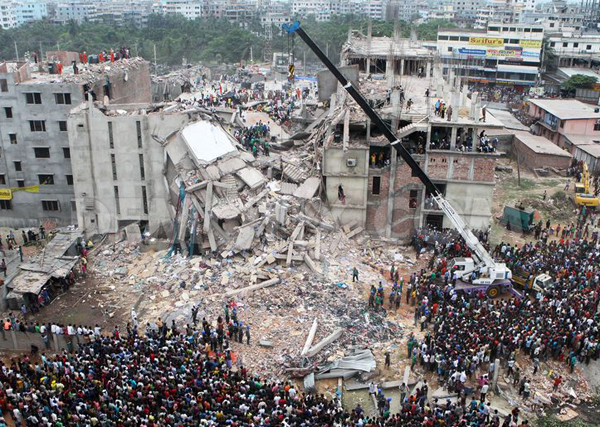 As quickly as Corporate Social Responsibility (CSR) has become a must-have in the world of business, has it become fashionable to criticise CSR for being nothing but window dressing. Critics including trade unions, citizen based initiatives, left wing politicians and academics, have all pointed to the fact that in many cases businesses were talking the talk but not walking the walk. This debate was rekindled following the November 2012 fire at a garment factory in Bangladesh which was covered widely in the Western media. With more than 1 200 people dead in more than 7 incidents since then, the media have had plenty to write about but seem to have avoided drawing attention to the impact that these accidents could have on corporate business strategies. Instead, the media have demonstrated the poor quality of the working conditions of the people at the producing end of the supply chain extensively.

The reason why this poses a risk to the concept of CSR and business strategies in general is that in the public mind, companies are expected to change their behaviour and purpose. A recently released survey makes exactly that point. The conclusion of the survey entitled “2013 Cone Communications/ Echo Global CSR Study” found that as many as 31% of all consumers now expect companies to be an active participant — if not a driving force — in solving the most pressing social and environmental issues. According to the report, “Consumers want to be part of CSR efforts and purchasing is their way of doing that”. So, companies need to not only deliver good products (environmentally safe as well as of decent quality) but issues like labour conditions factor in too. It was also found that as few as 6% agreed with the statement that, “Businesses only exist to make money for shareholders and are not responsible for supporting social or environmental issues.”

This survey is interesting as the more than 10 000 respondents represent consumers from the 10 largest economies measured by GDP, including the BRIC countries. Thus, it reveals the attitude among not only well-resourced consumers, but also relatively poor consumers from India, China and Brazil. The global scale of this new set of expectations explains why the social media are such powerful tools today and why it instantly becomes a huge issue when even a single production facility fails. As the debate on CSR emanated from the Western world, it has been a debate for and by the Western world. However, as the gap between the Western world and the developing world narrows, we see this pattern changing. Today, it is also a concern for people outside of the Western world and with modern technologies, it is possible for the formerly “voiceless” to be heard.

Certainly this was a contributing factor when several of the global retailers having apparel produced in Bangladesh decided to sign a document aimed at improving working conditions. So far, the Bangladesh Fire and Safety Accord has been signed by several of the world’s leading retailers including Carrefour, H&M, C&A and Inditex. The Accord calls for independent, rigorous factory safety inspections with public reports and mandatory repairs and renovations underwritten by Western retailers. A legally enforceable contract, it also calls for retailers to stop doing business with any factory that refuses to make necessary safety improvements and for workers and their unions to have a substantial voice in factory safety. In addition, the government of Bangladesh has decided to allow workers to join trade unions and is planning to increase the minimum wage, which today is the lowest in the world at just $37 per month.

That it only took three weeks from the collapse of the Rana Plaza production facility to the signing of the Accord is evidence of how important public image has become to companies and in this case, governments. None of the companies that had their name mentioned in relation to the collapse have been able to deny responsibility and even though important American companies like Walmart and GAP refused to sign the legally binding Accord, they have pledged to increase their efforts and strengthen policies on fire and safety issues. The process leading up to signing the Accord, by coincidence, confirms the major findings from the survey above: that it is not acceptable for companies to be seen as not having a “social conscience” or not acting as good corporate citizens in any of the countries where they operate. Bangladesh has shown that there is still a lot of work to be done in this respect, but has also demonstrated a willingness in the corporate world to act.

How does this bode for CSR in the future? Though what has been revealed about the working conditions in Bangladesh is nothing that wasn’t known 5 years or even longer ago –  and the companies therefore bear some of the blame – this is not evidence that CSR is failing and on its way to becoming obsolete. Instead, it shows that companies can no longer afford not to take into account public opinion and that companies need to be much better at understanding the impact that they have on local communities around the world. It remains to be seen how this will impact the business model in the Western world as the marketing strategies and pricing of final products are bound to be affected

But organisations like UNI Global Union, IndustryAll and the Clean Clothes Campaign have demonstrated the risks that companies expose themselves to if they are not proactive on issues hitherto believed to be of little or no relevance. Thus, the factory deaths do not spell the death of CSR, most likely it is “au contraire”.

Read the Fire and Safety Accord by clicking here