Silences: At the Geneva’s Musée Rath 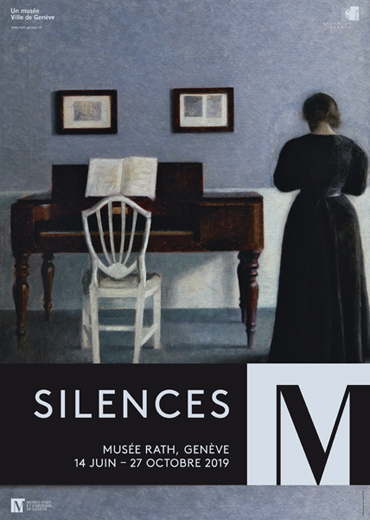 A grouping of works of art from Geneva’s Musée d’art et d’histoire as well as other European museums invite one to contemplate in silence and understand how the hearing impaired live every day in silence. But also, a welcome break for those who can hear but who wish to escape all the “noise.”

Wearied by the street noises and the bombardment of daily information from the outside world, I needed to retreat into myself, in silence.

I begin my silent journey in the museum Rath by watching a silent video by a French artist Camille Llobt, entitled “Voir ce qui est dit” (“See what is written”). In it, Llobt uses sign language to express the gestures and expressions of an orchestra conductor who is standing next to her while he conducts. Both the hearing impaired and those who can hear can understand what is communicated without words and sound. In silence.

Paintings from the early 17th century and up to the beginning of the 20th century follow in a room filled with portraits and dialogues between people we cannot hear but in silence, we understand what the artists wished to communicate due to the expressivity of the works of art. Then there are still life paintings that appear fixed in time but speak to us and continue to breathe life…

Eighteenth-century paintings known as “dead life” are the expression of activities carried out in silence. Portraits of people who express themselves in a quietude that invites calm contemplation. For instance, the superb engravings of the Swiss artist Félix Vallotton from the late 19th century to the early 20th century. And a painting by the same artist who depicts hate in silence and communicates the emotions felt by a couple through expressivity.

This is an exhibition not to be missed and runs until the 27th of October 2019. So, take a moment to contemplate and discover a world with no words, a visual world in which language is not needed.

My professional experience has been eclectic.

From working for an auction house, a major cultural institution or as a manager and copywriter for advertising agencies and for a radio station in New York State, I learned from each experience and gradually became more and more accomplished.

When organizing events, I think about the context and come up with ideas that are suited to each occasion.

I am people friendly and enjoy motivating "the troops".

Passionate about learning, I even taught myself Latin during my Medieval Art History studies at the University of Geneva, as I believed that it was essential to my research and understanding of the subject!