The nationwide strikes against pension reform have continued into their seventh day. With

When just local media are present at an event in Switzerland, nothing too internationally significant should be expected. But when different foreign media representatives are waiting impatiently in front of closed doors before an event launch in a small village near Zurich, including media from as far afield as Mexico, something pretty exciting must be going on. On 2nd February, 2013, the Sauber F1 Team hosted an event at the team’s base in Hinwil where its hope and pride was presented to its partners and media representatives: the new ‘Sauber C32-Ferrari’ Formula 1 car!

No better location could have been picked for the official unveiling of Sauber’s new racing car than the wind tunnel of Sauber Motorsport AG in Hinwil. Partners, guests and selected media were placed in front of a small stage where a car covered in a white sheet grabbed the attention. Everyone present could feel the tension of this special moment and everyone would have liked to uncover the brand new high-tech car themselves. But this honour had been strictly reserved for the two main drivers, German Nico Hülkenberg (25) and Mexican Esteban Gutierrez (21), the team’s new driver pairing:

“We have had our eye on Nico for some time and have been impressed by his performances. He is very quick, but, most importantly, he is also very efficient. He understands how to pick up as many points as possible from a particular race situation. Esteban is a driver we know very well as a result of a relationship with the team going back several years, and he has already had a number of opportunities to test with our car. I am in no doubt he is now ready to take the final step and put his outstanding talent on display”, said Monisha Kaltenborn, the Team Principal of the Sauber F1 Team, who has very high expectations in the all new driver line-up completed by Dutch test and reserve driver, Robin Frijns (21). 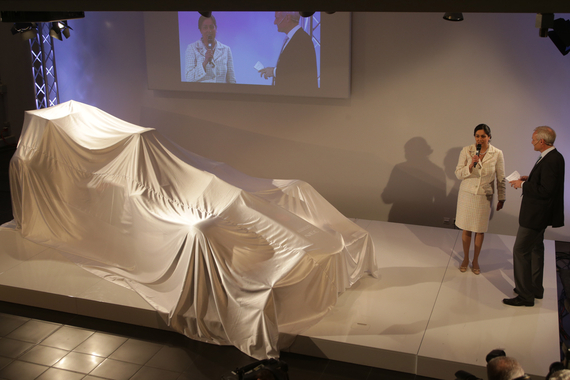 After Mrs. Kaltenborn left the stage, both main drivers entered while monumental music started to play. Everyone knew that the heart of the matter had been reached and photographers lit up the stage with flashes, setting up a perfect scenario for the unveiling of the Sauber. Hülkenberg and Gutierrez pulled back the covers and a aggressively dark looking and surprisingly slim Formula 1car was revealed. In relation to the predecessor, the C31, the latest model’s outer appearance has changed a lot, although the F1 regulations for the upcoming Formula 1 campaign have not. A smooth, slightly downward-sloping nose section and, principally, much slimmer sidepods are responsible for giving the car its distinctive look:

“The airflow in the area of the sidepods has a major influence over everything that happens at the rear of the car”, explained Matt Morris, the Sauber F1 Team’s Chief Designer. As before, the car’s KERS (Kinetic Energy Recovery System), engine (2.4 litre V8) and gearbox are supplied by Ferrari. The KERS is based on last year’s version, but its weight and packaging volume have been optimised. 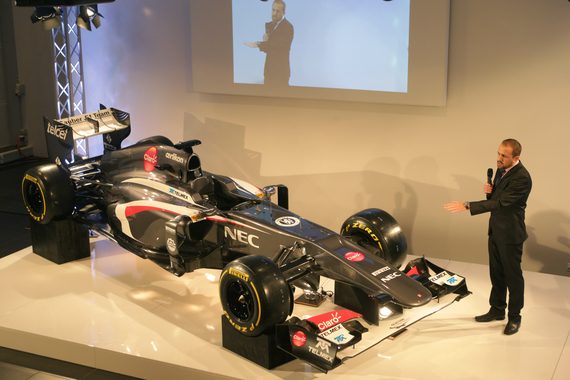 The roll-out of the ‘Sauber C32-Ferrari’ takes place at the beginning of February 2013, during the first winter test at Jerez de la Frontera using, like last year, a basic version of the car. Before the first race of the season, a major update will be introduced “to be competitive from the very start, but which also offers extensive potential for further development”, as summed up by Morris. Monisha Kaltenborn stated in a friendly yet determined manner when asked about the target for the upcoming Formula 1 campaign 2013:

“At this stage of the pre-season, it is definitely too early to talk about rankings. Our goal is to experience an improvement in performance which is dependent on not only our own efforts, but also on external factors that you cannot have an influence on”. 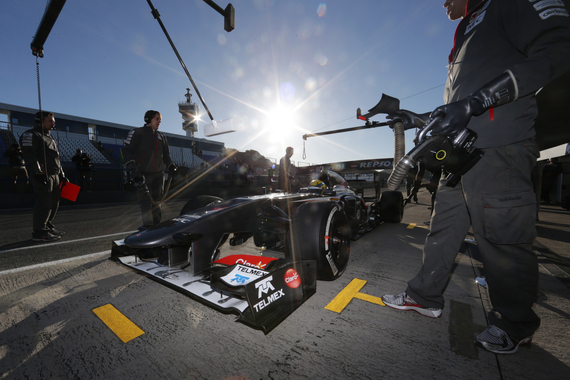 The Sauber F1 Team during the first winter test in Jerez

In 2012, the Sauber Formula 1 Team experienced a very successful year with former drivers Sergio Pérez Mendoz (now Team McLaren) from Mexico and Japanese driver Kamui Kobayashi. The team moved from seventh to sixth place in the constructors’ standings and, in addition, increased its points total from 44 in 2011 to 126 last season. In order to continue the team’s positive trend, the new drivers have to act as a unit performing consistently, the technical side of the ‘Sauber C32-Ferrari’ has to live up to its expectations, the other teams have to make mistakes and the weather should work in Sauber’s favour from time to time. The traditional opening Grand Prix in Melbourne, Australia, on March, 17th will tell us a bit more about the season to come… 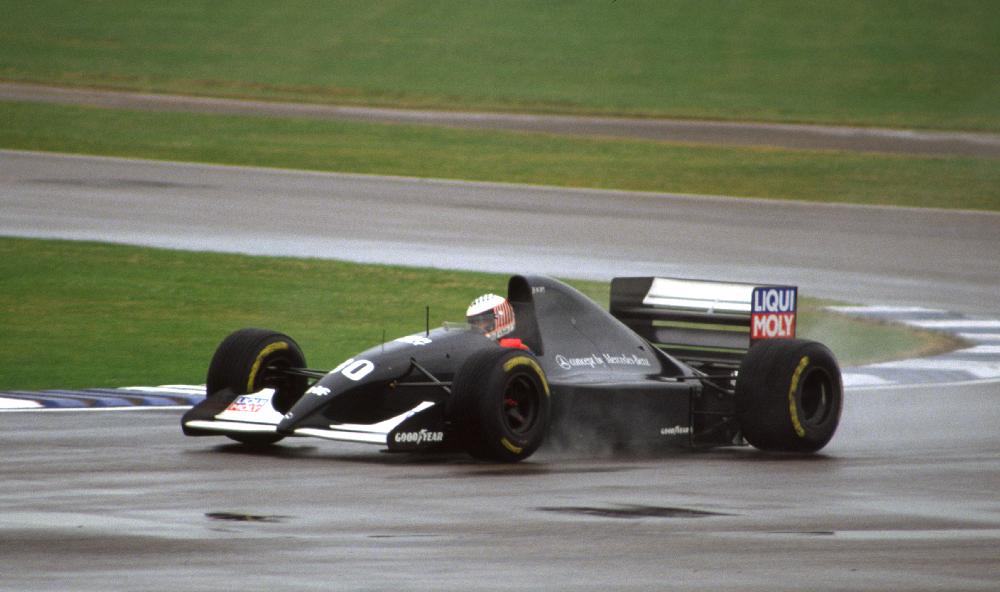 The origin of Sauber’s F1 history: The C12