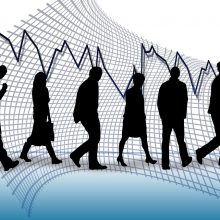 According to the State Secretariat for Economic Affairs (SECO), unemployment in 2018 averaged 2.6 percent, a record ten-year low.

Regional job centers recorded just over 118,000 unemployment registrations, representing a 17.5 percent decrease compared to the year before. In SECO’s view, these figures are indicative of a robust economy growing alongside a healthy labor market.

Employment rolls back in after years of stagnation

After years of stagnation, the unemployment rate started falling in May 2017 to around 3 percent, with most of the decrease taking place during the first half of the year.

However, unemployment rose slightly again that year during the months of November and December. By the end of 2018, SECO reported a total of 119,661 jobless claims, representing an 8.3 percent increase compared to previous months, yet more than an 18 percent decrease compared to 2017.

As expected, youth unemployment (those aged 15 to 24) rose last August when many students graduated.

Top and bottom of the class

According to government predictions, economic growth is expected to slow down to 1.5 percent in 2019 and pick back up again to 1.7 percent in 2020.

I am first and foremost a creative PA. Why? For two reasons. I have the ability to build and develop relationships based on mutual trust. It is about communicating not just with person I am supporting directly, but with the circle of contacts and networks I need in order to be able to do my job well. As well as this, as every day is different and when a plan A doesn't work, I have the flexibility, resourcefulness and confidence to research, analyze and then propose alternative concrete solutions to make sure my manager is satisfied.