The end of plastic bags in Geneva? 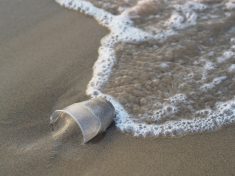 The State of Geneva may soon ban the distribution of plastic bags in all shops.

The Geneva Parliament’s environment committee has recently accepted a draft law on this matter. The aim of this new bill is to reduce plastic bag usage, even though a reduction of 80 percent was already been achieved between 2016 and 2017 in the canton. In addition, since 2016 the two major supermarket chains have been charging customers for plastic bags.

According to Delphine Bachmann (elected representative to the PDC), “we must encourage the consumers and retail shops to become more responsible. It’s a first political step before stopping the industrial production and reducing freedom of distribution.”

The Swiss use plastic a lot. Each year, the country generates nearly 100kg of plastic waste per capita – more than three times as much as the European average and recycles plastic 30 percent less than other European countries.

If the draft is accepted by the Council, Geneva will become one of the first cantons to effectively ban the free distribution of plastic bags in all shops.

Journalist, author and also active in legal matters, my career path has gifted me with various skills and competencies and is reflecting the diversity of my personal interests, ranging from art, politics, legal matters, to science.