DETAILS
10 000 jobs created after ‘try before you hire’ scheme

FOROM, the Forum Economique Romande, which regularly hosts events where participants are encouraged to network and exchange about subjects that affect the economy in the French-speaking part of Switzerland, provided an interesting afternoon last Wednesday on the topic of data security. The main speakers included experts in cyber security, legislation, education and datacenter management. This good mix of speakers was also combined with a motivated audience of experts in the data management field. 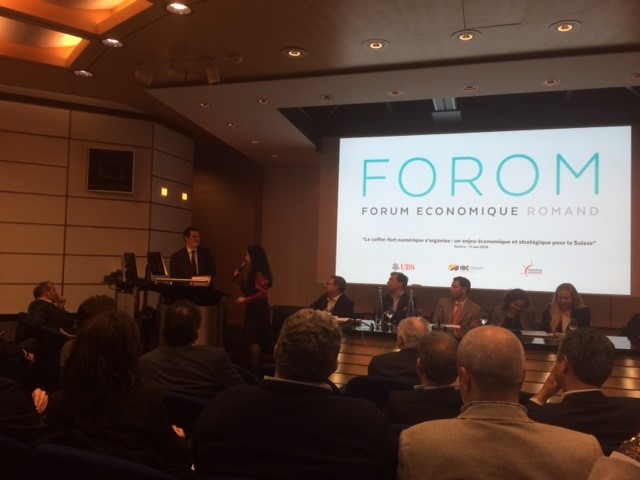 The event was expertly chaired by Ms. Myret Zaki, Editor-in-Chief for BILAN magazine.

The main sponsor was VIGISWISS, the Swiss Datacenter Association, newly formed in February 2016 with the intention of uniting independent (Swiss) datacenters into a group that will offer world class highly secure data storage services. The association’s charter lays down regulations by which members must abide in order to qualify for registration.  These rules include the ongoing safe management of customer data, the legality of the customer data being hosted, and the security methods used for safe storage facilities. Many Swiss datacenters are already members of this project.

VIGISWISS is creating the “world’s safe haven for data”. It uses the historic reputation of Switzerland in the banking world, renowned for its secure handling of money and protection of bank customers’ data. The idea is to create a group of datacenter “data storage banks” that strictly adhere to clearly identified operational standards. These datacenters’ customers are protected by Swiss legislation, which focuses on confidentiality.  The task of this association is to raise national and international awareness of the top-quality datacenter services available in the Swiss marketplace, especially since they operate within a safe environment that is independent from direct European and US legislation.

The event started with individual presentations from and discussions between the panel members. This was followed by open and lively interaction with the audience which included many comments and questions relating to the security of data in datacenters and transmission of data over networks between them.

Toward the end of the exchange, Mr. Pierre Maudet, Conseiller d’Etat du Canton de Genève, joined in the event. He was very open in his response to questions concerning ongoing Swiss legislation relating to secure data. The dilemma for all security agencies worldwide is that confidentiality and security for individuals will always present concerns for the services looking to protect society from criminality and terrorism.

This afternoon provided a positive focus on creating marketing and sales strategies for the Swiss Datacenter community as a whole. The members of VIGISWISS are set to show the world a commitment to offer the highest datacenter standards within the Swiss marketplace.

The event was jointly organized by SPEG (the Service for Economic Promotion for the Canton of Geneva), OPI (the Office for the Promotion of Industry and Technology), Alp-ICT, Fondetec, VIGISWISS (the Swiss Data Center Association) and BILAN magazine.