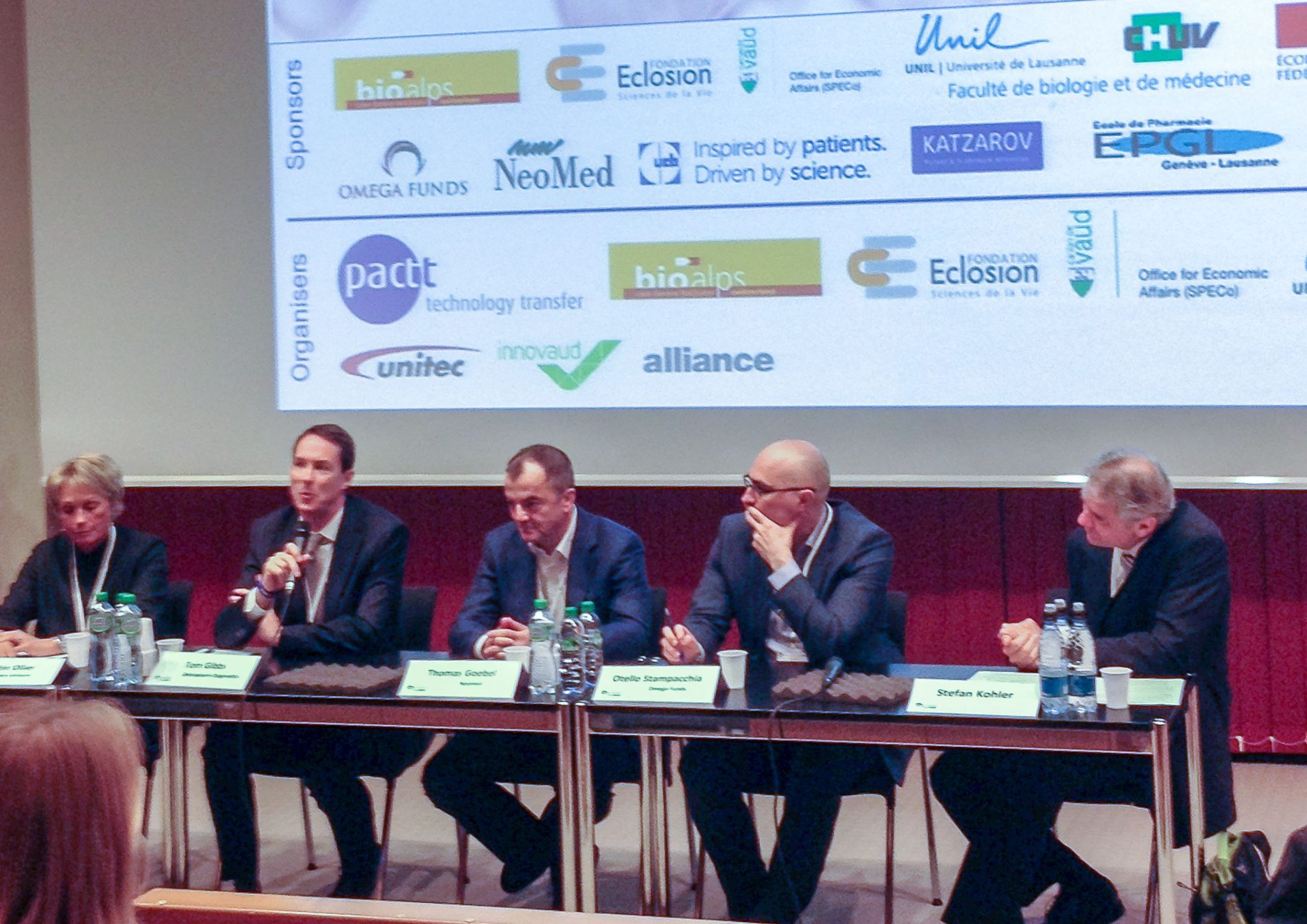 On June 23rd, the seventh edition of Bioinnovation Day was held at the CHUV in Lausanne. Bioinnovation Day provides a platform for scientists and start-ups to present their life science projects to potential investors and partners from the industry. It was first held in 2006 in Geneva, and has since welcomed more than 150 innovative projects. Held every other year, the seventh edition was organized by PACTT, the Technology Transfer Office of UNIL-CHUV.

This year, over 200 participants attended the meeting. It was organized around several keynote speakers, and gave 34 researchers the opportunity to present their projects in five-minute-long pitches. The poster sessions, which took place in a friendly atmosphere during the breaks, offered participants more information on the projects, and gave them the opportunity to network, exchange ideas and discuss.

The presentations were divided into four sessions related to Human Therapeutics, Research Tools, Medical Devices, and Digital Health and Diagnostics. During the first session, a roundtable discussion was held by four investors: Tom Gibbs from Debiopharm Diagnostics, Thomas Goebel from Neomed, Michèle Ollier from Index Ventures and Otello Stampaccia from Omega Funds. They gave advice on what should be considered when developing a new product and at which stage of development potential investors should be contacted. All of them agreed that the time and money needed for establishing a new start-up should not be underestimated.

Philippe Dro from GlycoVaxyn and Vincent Charlon from Anergis SA presented their companies’ histories and how they got where they are today. One important point that came out of the discussion was that even with a very good achievable and customizable idea, the circumstances must be beneficial in order to succeed.

The 34 project pitches were given by researchers from public and private institutions aiming to create start-up companies, as well as investigators from existing companies seeking additional investments. The projects were highly diverse: from a surface treatment for implants which improves the integration of the implants into living bone by mimicking bone-like characteristics, to a new technique for separation of different cell types, of which the first application will be to isolate sperm cells from samples obtained from rape victims in order to identify the DNA profile of the offender. Other innovations included a comfortable and discrete insulin delivery system for diabetes patients, a device for skin cancer screening, and a simple and cheap sterilization system for medical instruments in hospitals in developing countries.

Each year that the event is held, a jury of nine scientists evaluate innovative projects from western Switzerland in order to award the Bioinnovation-Eclosion Prize, which for the second time, included a cash award of CHF 10,000. The jury selects a number of projects and invites spokespeople to present them before the event in order to determine the winner. This year, it was awarded to Gilles Weder from CSEM (Centre Suisse d’Electronique et de Microtechnique SA) for his work on a sensor for measuring the oxygen concentration in cell and tissue cultures.