Jessops, a camera retailer in the UK, has agreed to a restructuring plan with its biggest

Have you ever been recommended to follow the guidelines of a food pyramid? Do you believe that it is in line with the latest research? According to the website of the Food and Agriculture Organization of the United Nations, Switzerland published its first set of dietary guidelines in 1998. The current version, the third one, was developed and introduced by the Swiss Society for Nutrition in 2011 in collaboration with the Federal Office of Public Health and experts from science and industry, as well as on the basis of a public consultation. According to the OSAV (Federal Food Safety and Veterinary Office) website, it provides an important basis for the Swiss Nutrition Policy and the National Programme on Diet and Physical Activity. The Swiss food pyramid was then endorsed by the Federal Office of Public Health. Since January 2014, OSAV is the competence centre and is responsible for all questions concerning nutrition. 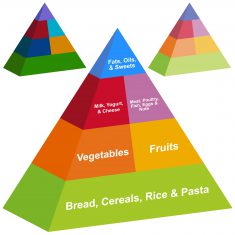 However, how useful is this pyramid and indeed the advice which comes with it? Is the pyramid keeping up with the latest research, or with informed consumers who appear to be taking matters into their own hands and rejecting the advice? And, could it be harming the older generation who are potentially not internet savvy and unable to source alternative information online?

According to “Fat: The New Health Paradigm”, written by Manuel Hörl and published by Credit Suisse Research Institute in September 2015, the trend is that consumers are choosing fat and protein over carbohydrates and vegetable oils. The report, which is based on more than 400 medical studies, concludes that there is no link between cholesterol or saturated fat consumed and heart disease. This is apparent in the US, where conversely, despite following the traditional recommendations, instead of seeing a reduction in obesity, diabetes, and other associated diseases, there has been an explosion in diet-related illnesses that is reaching epidemic* proportions globally.

Are these historical recommendations to lower our consumption of saturated fats and cholesterol (such as eggs) whilst increasing polyunsaturated fats (e.g. colza and sunflower) and carbohydrates out of date and potentially harmful? The Swiss government is aware of the issue as is evidenced by the MOU (Memorandum of Understanding) signed in Milan in August 2015 between the OSAV and the major food distributors and producers. This voluntary agreement gives a four year grace period to gradually reduce the sugar in breakfast cereals and dairy. However, are healthcare professionals and the government too slow to react in terms of advice?

At a recent presentation on diabetes hosted by the FAAG (Fondation pour la Formation des Aînées et des Aînés de Genève), this ‘torpidity’ was obvious from the presentation given by the healthcare profession. Two senior healthcare professionals were advocating the use of the pyramid, specifically advising to limit consumption of nuts, all oils and fat (including butter, olive and coconut oil) and to replace these with carbohydrates. Afterwards, an “aperitif” of chocolate biscuits and croissants was offered!

As more proven scientific evidence emerges, it appears that the public’s eating habits are evolving organically. As stated in the Crédit Suisse study, “The correction of a major nutritional mistake – the shift away from carbohydrates to fat – is finally underway on a global business basis and bodes well for the future.” This raises the question as to whether or not the government and mainstream healthcare profession in Switzerland should be proactively driving this positive change instead of following in the wake. It is important to ensure that the updated information is communicated to all sectors of the population in a more timely manner, as our eating habits are really a matter of life and death, and one which could positively benefit the economy in terms of reduced absenteeism due to illness and healthcare costs.

*According to the Global Report on Diabetes 2016, currently 422 million people are suffering with diabetes.

Using the skills I have gained from Management Accountancy to research, analyse and communicate Solutions for a Healthier Lifestyle. Passionate about making healthy, naturally gluten free food which tastes delicious!