On average, women in Britain earn 16% less than men with the figure rising to 27% for wome

E-books and the evolution of the publishing industry 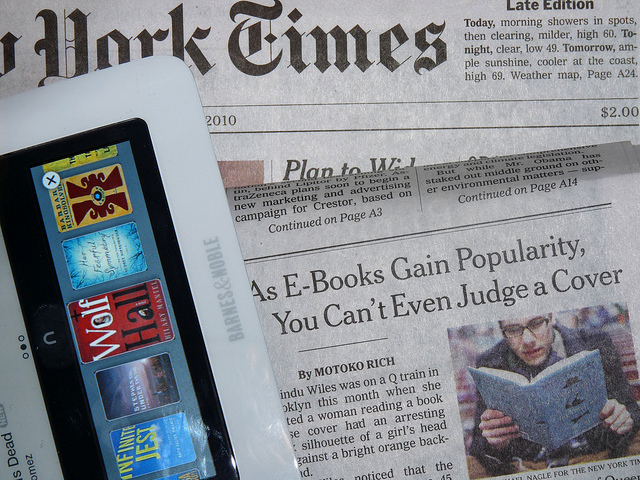 Reading books is the world’s favourite pastime. According to a German survey, people prefer reading over going to the movies, surfing the Internet and playing video games. Books are indeed big business, particularly in Europe, the Middle East and Asia, with the industry worth almost $1.1 billion in 2009. Since the 1990s, however, the industry has seen a major shift in many aspects including publication, distribution and policies on book lending. With the rise of e-books, the publication industry joins the film and music industries in the Information Age and accepting digitisation.

The first e-book appeared decades ago, in 1971, when the American Declaration of Independence was published electronically by Project Gutenberg. But it was in the 1990s, with the spread of the internet that electronic publishing became accessible. E-books were originally conceived to be used on computers, but this turned out to be far too impractical. Reading for pleasure needed to be as easy to read and as practical to carry around as a book.

In 2004, Sony released the first E-ink based reader. E-ink makes battery life last much longer and does not require a backlight, meaning that it will not strain your eyes any more than a piece of paper. However, it was not until Amazon’s Kindle e-reader was released in 2007 that the US market for e-books exploded. E-books represented a mere 1% of publisher’s revenues in 2008; but in 2012, that number had risen to a staggering 23%.

In Europe, the e-reader has yet to reach the same popularity. While e-books  represent an impressive 15% of sales in the United Kingdom, sales in France only represent 3%, followed by 2% in Germany and 0.5% in Spain. This number is expected to grow and eventually surpass the US in number of sales.

The popularity of e-books is easy to understand. The books are available immediately and e-readers are often more compact and light-weight than their paper counterparts. However, this new technology is not without its problems. In 2009, Amazon remotely deleted copies of George Orwell’s Animal Farm and 1984 from thousands of Kindles, due to copyright issues. While the cost of the books was eventually refunded, the threat of people losing entire digital libraries is a risk that some are unwilling to take. Unlike paper books, e-books never truly ‘belong’ to the purchaser. E-books are merely ‘loaned’ to consumers by the copyright owners and as a result, there are limitations and customers cannot lend or give copies freely,

In Switzerland, other problems face potential e-book purchasers. Amazon dominates the UK and US e-book markets, with 75% and 63% shares respectively. However, since Switzerland has no Amazon address specific to the country, Kindle owners are automatically redirected to Germany’s Amazon.de. For Swiss-Germans, this poses no problem; but for the almost 2 million people living in French-speaking Switzerland, as well as the many thousands in Italian-speaking Switzerland, navigating a website entirely in German is a severe hindrance.

Issues also exist for publishers, as piracy is a major issue for any digital content and can result in massive losses.  In Germany, 60% of downloaded e-books are pirated copies, recalling the same problems that the music industry faced with digitisation. Copyright laws also lead to friction with libraries. Since e-books do not wear out, libraries could potentially purchase titles once and never need to replace them. This would mean that anyone with a library card would have unlimited access to untold numbers of books, resulting in more major losses for publishers.

While e-books seem to be an ever-increasing presence on the market, it is important not to lose sight of print either. Since people who buy fewer than 10 books a year are unlikely to buy e-reader devices, print is unlikely to die out anytime soon. Print sales are down, but they still represent the majority of the market and aren’t disappearing as quickly as originally feared. Many experts agree that digitisation is an opportunity for the market, rather than a problem. It is a chance to drive sales among the tech-savvy 30-something crowd, since the over 40 age bracket consistently buys the most books. For the most part, it seems that e-books will coexist with printed books. While certain types of books may disappear from the shelves, it’s unlikely that print will vanish entirely. Discovering new books is entirely different online than visiting a book store and is not always user-friendly. It is important that publishers address the growing popularity of e-books by adapting their business processes in all areas, but that they not forget the print medium that they came from.

Can an e-book ever really compare to cracking open a musty hardcover book? In terms of tactile experience, probably not; but in terms of convenience and accessibility, it’s hard to deny the advantages.