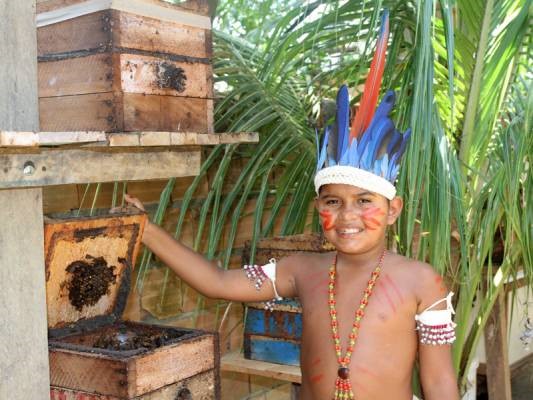 “I am not a visionary, it was my responsibility”, Anita Studer

I met Anita Studer on a cold Wednesday morning at her offices in Geneva. Anita quickly warmed my heart when she explained to me her ongoing quest to save the Amazonian forests.

As a biologist and ornithologist, Anita went to the Brazilian rainforests in early 1985 to research birds and publish a study. She learned that one of the birds she was studying would become extinct before the publication came out. At that point, she realized that either she could continue her research in vain because the bird in question would no longer exist, or she could save the forests. She decided that it was her responsibility to do both! In Anita’s words: “I was told it was impossible but I decided that the word impossible did not exist.”

It was a huge challenge because the people in the region either were afraid of the forests, or they wanted to clear them for agricultural purposes. In addition, the region was in the hands of big landowners (such as livestock breeders) and the forest covered two neighboring states that were not under federal control.

Determined to do something, Anita contacted one of the owners who was also a mayor. She struck a deal with him in April 1985 by offering to re-build a school that had burned down if he would contact all the mayors in the region to sign a petition and convince them to save the forests. The mayor agreed purely because he realized that he would gain many votes from this decision.

At that point, Anita raced back to Geneva to found NORDESTA in May 1985 and gather the funds to re-build the school. In August of that year, the school was inaugurated and the forests were declared a “State Reserve.”

Preceding the birth of NORDESTA, Anita’s biological son was born in 1982. In 1984, she adopted two Brazilian children. This began her journey of saving not only the forests but also educating children in the region by building schools and creating workshops, teaching skills such as sewing and carpentry. All this was accomplished within five years. By 1989 twenty children had been schooled with NORDESTA’s funding, giving them the possibility of having a professional and sustainable future.

In 1989, due to her good relationship with the mayors, the two state reserves became a Federal Reserve.

At the same time, Anita realized that she could not carry out her mission without involving the local population and making the locals grow to love trees. Her next project was to teach them how to germinate tree seeds and plant them. Instinctively, she knew that paying the locals to do this would make them treat the trees as their family, and they would never be able to cut them down.

As Anita said during our interview: “This was not Anita’s project, it was their project.” It was the local’s mission and she taught them how to create an informative forest guide for tourists and visitors.

NORDESTA also brought back native bees to the forests, to not only pollinate the plants but also to give the opportunity to locals, mainly women, to harvest honey.

The future of NORDESTA? The situation is not bright for the Amazonian forests but when Anita goes to Brazil to educate the children she tells them that it is POSSIBLE to positively change things, particularly changing the dangers the Amazonia forests face.

My professional experience has been eclectic.

From working for an auction house, a major cultural institution or as a manager and copywriter for advertising agencies and for a radio station in New York State, I learned from each experience and gradually became more and more accomplished.

When organizing events, I think about the context and come up with ideas that are suited to each occasion.

I am people friendly and enjoy motivating "the troops".

Passionate about learning, I even taught myself Latin during my Medieval Art History studies at the University of Geneva, as I believed that it was essential to my research and understanding of the subject!