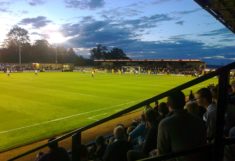 Football is by far the most popular sport in the world. It is entertaining and unites fans all over the world. There is a real passion for a favourite team or player.

Football can even prevent civil wars, like with the situation in Ivory Coast and Didier Drogba.

The environmental impact of Football

Yet it also has a negative side, specifically its negative environmental impact. For example, football grounds require a lot of water. Floodlights need a lot of energy. Polyester football kits (a synthetic petroleum base fibre that uses non-renewable items) are carbon intrusive. Then there is the large amount of waste and rubbish left in the stadiums from fans.

Positively, clubs and footballing bodies are becoming more and more conscious of these issues and are starting to take steps in the right direction.

One football team that is very aware of the value of being environmentally friendly is the professional English club, Forest Green Rovers. Since 2010 they made a number of changes and are now considered the world’s greenest football club. Let’s get to know this team that has been one step ahead of everyone else for years.

Based in Nailsworth, Gloucestershire, FGR was founded in 1889. Generally, they played in the regional leagues and were fairly inconsistent. In 1998, they won the Southern League Premier Division, which finally secured their entry into the Football Conference (now the National League), where games are played nationwide. A big step for the team. This also increased their visibility, and at the time of this article, they are first in the Football League Two (4th division in England) and on the road to promotion to the third division.

The team’s transformation started with Dale Vince, a green energy industrialist. He bought the club in 2010 with a view of making it eco-friendly. He oversaw the construction of a new stadium lawn that had numerous eco-friendly innovations. For example, they developed an entirely organic pitch and had 180 solar panels installed on the stadium roof. These solar panels help power the club’s self-guiding mowers. The team’s kit supplier makes eco-friendly jerseys. It has even won awards due to the sustainability of the pitch and the stadium. In 2015, they became the world’s first football club to only sell vegan food at a stadium.

In 2016, the FGR decided to begin the design for a new stadium to increase seating capacity from 5,000 seats to 10,000. What makes this a big step forward for sustainable football, however, is that the stadium is supposed to be made almost completely of wood, which is impressive in itself. Additionally, this new stadium is intended to have the lowest carbon footprint of any stadium in the world. The stadium, to be called Eco-park, was approved by authorities and should be completed in the next three to four years. 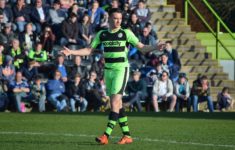 All this hard work by the owner has paid off both on and off the pitch. Not only is the team nearing promotion to the third division, but it has also been praised by some of the biggest organizations in the world. For example, in 2016, the United Nations claimed the team were the world’s first carbon-neutral football club, and FIFA applauded them for being the greenest football team in the world. This even led to the team getting new partnerships with the popular YouTube channel, Fully Charged, with focuses on clean energy and electric vehicles, which makes this partnership very judicious for both parties.

In 2015 the owners wanted to avoid the huge impact of carbon emissions and animal welfare concerns caused by livestock farming, as well as provide healthier food to fans. Here are just a few examples of the sorts of food that fans can expect to get on matchdays; award-winning Q Pies, plant-based burgers, spicy pasties, and vegan fajitas. Additionally, all the ingredients are locally sourced. In recognition of the clubs’ policies, in 2017 they received the Vegan Trademark from the Vegan Society.

The FGR community is a very active one and is very involved in the sustainable development goals of the club both on and off the pitch. Off the pitch, they promote sustainability and green principles. For example, at local schools, they share their experience and the benefits of vegan food. Additionally, the club organizes activities ranging from football tournaments and holiday camps to training sessions at local schools.

They also get involved in health and wellbeing. The club has a special program called Fit2Last, with the goal of teaching young people how to stay healthy and prepare vegan meals. Furthermore, they have an initiative called FGR Talk Club that supports men’s mental health, tackles loneliness in the community, and organises food projects within the community to help those who are less well off.

They also tackle social issues such as drug use within the community. FGR also gives back to the community by allowing schools and community groups to attend games for free.

Hopefully, FGR’s commitment to environmental values – and the fact that they are also successful on the pitch – will motivate other teams and institutions to take the initiative to make a bit more effort to protect the environment.

Nevertheless, there are a few challenges along the way before being able to achieve this. For one, football fans are not fully aware of football’s environmental impact, but even the ones that are aware do not want to change their ways.

Fortunately, there are little steps that football clubs can already take to become greener, and if as a community we all do a little bit, the results will already be big and will motivate fans to do even more.

Here are a few examples of what clubs can do to start going in the right direction:

Hopefully, teams will start taking notice and make small adjustments in the right direction. If everyone works together, this will already be a huge step in making football more eco-friendly.

Love football? Could UEFA be the organization for you?