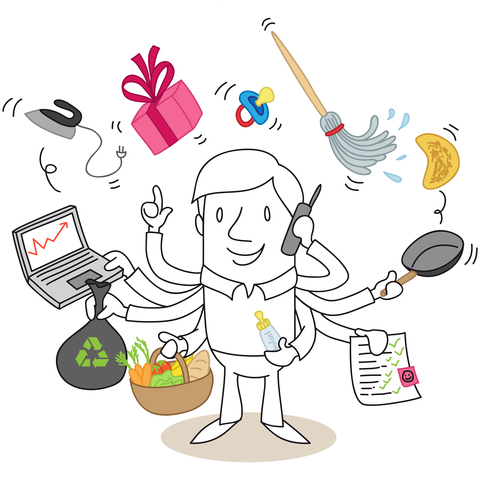 For many years now we have talked about ‘Wonder Woman’; the single women bringing up children all the while holding down a career. It is well known that juggling a career, collecting children after school, doing the shopping, cooking dinner, cleaning and making sure that everyone is in good health just to mention a few of the chores, is no mean feat.

There is also the emotional side of the coin of making the decisions alone and the self-doubt of whether you are doing a good job. Children need role models, nurturing, reassurance and firm guidelines to make them feel secure. Single mothers know the stress that comes with trying to be good at everything.

With 8% of men in Switzerland now embracing the role of primary care taker for their children, it seems that times are changing.  In the UK, 8% of the 2 million single parents are men. With this tendency growing, charity internet sites are being created for single parents to have access to online advice covering a large range of topics ranging from how to obtain child maintenance, benefit entitlement, where to get emotional support, and coping with finances, all with platforms to share experiences. Unfortunately, unlike the UK, there are no charities in Switzerland that specialize in offering support and advice for men dealing with the stress of single parenting. Whereas women will readily reach out to friends and family, men often feel more isolated and are more reluctant to ask for help.

A good example of a single dad juggling parenthood and a career is Bertrand*, father of two adolescent girls, excelling in his career as a full-time Electrical Engineer whilst dealing with the 24/7 role of being a parent. His eldest daughter lives with him full-time and his younger daughter every other week. Bertrand starts work early, generally 7am but sometimes 6am.  This, on its own, is no problem for Bertrand who is naturally an early riser.

However, it becomes a problem when his eldest daughter skips school as no-one is there to check she gets ready and leaves on time in the morning.  Then there are the bad marks at school, homework not being done, and being the only one to motivate or reprimand the children, not to mention the lonesome worry of giving the right guidelines.

As his daughters gradually change into young women, Bertrand has sometimes found himself at a loss, embarrassed to discuss certain subjects that are typically dealt with by mothers. However, he is lucky to have a good support group of female friends that he can rely on to give him advice on how to approach certain delicate subjects. Also, he is lucky his children are adolescents. Despite this bringing its own set of challenges, it is often easier than bringing up a baby or very young children.

Some men are surprised at the workload involved in being a single parent. For example, when relations with children get tense, the other parent is not there to step in and take over in order to give the breathing space necessary for things to cool off. Work is often an issue as well, since it is socially acceptable for women to work part-time in order to be there for her children.

For Bertrand, the option to be there full-time for his children was a ‘no-brainer’, as despite being separated from his wife, he wanted to be with his children as much as possible. Today, despite having little time to himself, Bertrand has no regrets. This may be the toughest job he has ever had, but he feels that he is doing as good a job as many other single parents in the same position.

As we see more and more companies encouraging parity and work-life balance in order to preserve the health of their workforce, some companies are still reticent to offer part-time working hours –for mothers or fathers—due to the administrative cost involved. This is still a major problem for single parents. For some, there seems to be no other option than to go self-employed.  As we see more men taking on the role of primary caretaker, it is obvious that society is changing and the stigma of being a Papa or Mama Solo is a thing of the past.

We are now seeing more men willing to take on the role of primary care taker and they are proving to be able to do just as good a job at it as women.

The era of Wonder Man has begun.

I am a seasoned Assistant with experience working in legal, financial, fiduciary, human resources and humanitarian environments. As a holder of certificates in both HR and payroll administration, I have good all round knowledge of Human Resources in Switzerland.

I work well in a team environment whilst being autonomous in my duties. Good social skills enable me to adapt to different communication and working styles. A proactive problem solver, I enjoy learning new skills. Having a keen interest in personal development and passionate about what makes people successful has led me to work in environments where people can grow.