Geneva has many social clubs catering to those expats who yearn for activities that reflect their homeland and provide an opportunity to interact with their fellow nationalities.

I joined one such club – the Nordics Club, which attracts members from the five Nordic countries – in 2013.

Why did I become a member? Simply put, I love to meet people from other countries. A lot of social events are organised, and it greatly satisfying to meet new people. After a few months of membership, the Club’s President asked me to become the Events Officer. It seemed like a good idea to accept so I could get even more involved in the community.

I found that I could attract many new members simply by talking about the Club to people I met at different events and, well, asking them to join! Many were very interested to become a member because they were attracted to how events were organised and the wide range of activities on offer. In 2014, I became Vice President and Club Treasurer, responsible for recording and keeping the expenditure records.

Club events include cooking Scandinavian specialties, organising cruises on the sailing boat Neptune, crayfish and Christmas parties in my house! I usually had to cater for around 25-30 people, which entailed sorting out decorations of all kinds and providing food and drinks. This was in addition to organising board meetings.

In the meantime, the club was growing bigger and bigger.

Now I am an Events Support Officer helping the club with other activities and events. 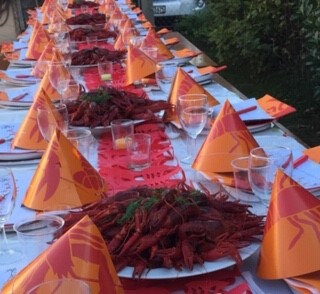 The Nordics Club Geneva was founded in 1949 by young recent Nordic expats. It gathers people living around the French-speaking part of Switzerland and members originate primarily from the Nordic countries – Denmark, Finland, Iceland, Norway, Sweden, and the Baltics – plus those who have a close attachment to these countries.

The Club arranges various events during the year both for families and children. Among the various events are both classic Nordic traditions as well as events inspired by local Swiss customs!

As a receptionist my raison d’être is to help others. From working in banks or family offices to a range of different departments for the State of Geneva, one thing has always come across in feedback from colleagues, clients and superiors: I am personable and find it easy to develop effective, efficient relationships with people from different cultures and countries.

I love working as a part of a team and use my listening skills to make sure that I answer whatever needs the person in front of me or over the phone might have. Quite simply, I love my job.

And when I’m not acting as “the face of your organization”, you’ll find me outside, doing sports, enjoying nature…or if you’re Scandinavian, maybe even at a Nordics Club of Geneva event I’ve helped organize.