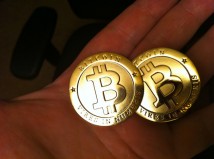 As shown on Coinmap, the number of businesses accepting bitcoins in Switzerland as payments for goods or services is on a very positive upswing. Elsewhere, Overstock became earlier this year the first major retailer to accept this digital currency. Currently receiving more than $300,000 a month from Bitcoin sales, CEO Patrick Byrne expects Overstock to reach monthly sales of $1 million by the end of the year. This would represent between $6 and $8 million in Bitcoin sales in 2014 (out of a projected total sales of $1.5 billion).

With 2 to 3 per cent savings in transaction costs in relation to a credit card payment, Bitcoin transactions have a significant impact for retailers like Overstock which has “razor-thin margins”. “We’re in Bitcoin for the long haul, I intend to make it permanent,” said Byrne. Overstock plans to accept Bitcoin payments from international customers, including Switzerland, by mid-September this year.