16 billion spent in Switzerland by tourists 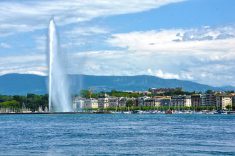 The balance between tourist revenue in Switzerland and what Swiss tourists spend while abroad was negative in 2017.

The Swiss Federal Office of Statistics announced that there was a difference of 122 million CHF between what was spent here and what was spent overseas.

Overnight stays, which some two-thirds of Swiss tourism accounts for, returned to growth in 2017 following two consecutive years of decline.

In comparison to 2016, the revenue from overnight stays increased by 192 million CHF, for an overall total of 10.6 billion CHF.

Finally, despite a strong appreciation of the Swiss franc, the Helvetians continue to travel a lot though there are no surprises for what are the most popular destinations for the Swiss; Germany, France and Italy.

With excellent customer focused service, I have been responsible for travel account portfolios ranging from humanitarian groups to leisure-orientated customers. Negotiating contracts, hosting events, implementing new revenue streams and building strong and long-lasting relationships with clients have been the hallmarks of my career. My professional interests include finding solutions for humanitarian and corporate clients using my extensive travel industry knowledge.