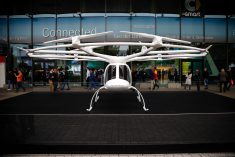 The German firm Volocopter has provided an insight on this very subject. They have shown how passengers board and disembark and how the charging and replacement of drone batteries is managed.

Several autonomous flying taxi projects have already shown their technical viability. We have a fairly good idea of ​​how this type of aircraft could work to transport one to two passengers on short urban routes. But where will these devices land? How will the battery recharging be done? All this is still unclear.

Volocopter decided to provide an overview by publishing a simulation showing the operation of a station called Volo-Hub installed on the roof of a building. The concept ressembles a cable car, with drone taxis landing on a pad before sliding along a treadmill inside a hangar. The passengers disembark, and the aircraft continues its way to the service area where its battery pack is automatically changed by robots. It then goes to a parking area, ready for a new journey.

Thanks to this system of continuous rotation, Volocopter says it can take off and land a taxi drone every 30 seconds. To complement these large stations, the German company has also imagined Volo-Port, which are small heliports installed near shops, hotels, large companies or railway stations.

The idea is to create complementary networks between a Volo-Hub and Volo-Ports to service areas of high demand. The company believes that its first taxicab drones will be operational in a decade, offering a transport capacity of 100,000 people per hour.

With a Swiss professional qualification in retail management and seven years’ experience in sales, whether managing customer services, training co-workers or simply motivating them to reach their objectives, I am highly skilled and confident working in this area.

I am fascinated by the ways in which technology can help an organisation or brand to provide superior customer interactions.