DETAILS
UK: Demand for City workers at highest since 2007 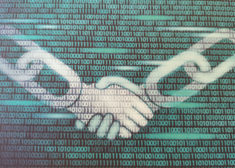 In my previous article, I looked at the two consensus mechanisms required for blockchain ecosystems to operate. Here I look at how these technologies impact in the job market.

According to Cryptopedia, “A smart contract is self-executing code that carries out a set of instructions, which are then verified on the blockchain. These contracts are trustless, autonomous, decentralized, and transparent; they are irreversible and unmodifiable once deployed.”

One way to think about it is that smart contracts operate like vending machines.

If one condition is met – putting money into the machine – then another pre-coded process occurs – the delivery of a selected product.

You can define cryptocurrencies as smart contracts that involve rights to “property”; the transactions represent “property” being transferred from one owner to another.

For those versed in mathematics, smart contracts are simply the application of algorithms; a set of rules defining sequences of instructions to solve problems or accomplish tasks.

With this, you can create complex contracts that allow a large range of interactions between entities globally.

Let us now look at the impact blockchain and smart contracts will have on various sectors.

Blockchain is basically accounting, bookkeeping and the recording of transactions. The journal entries aspect of accounting, therefore, could be heavily impacted. Accountants will have to be more IT savvy, and able to understand the technology and “concentrate on planning and valuation”, according to the Institute of Chartered Accountants of England and Wales.

Accountants will definitely need to learn how to code smart contracts, or at least be able to audit them. A minimum level of proficiency in the most common coding languages will be crucial.

Auditing may also end up disappearing as the financial information about a company would be accessible in real-time. According to Olivier Desplebin, Gulliver Lux and Nicolas Petit, the subject of audit could be the blockchain implemented in the company itself.

The most common tasks in accounting could very well disappear because of blockchain. Invoicing could follow the same path if smart contracts are fully developed and utilized.

Shipping and receiving goods across complex supply chains often prove difficult. Challenges arise in traceability, financing, delays, and accountability in case of damaged items. The creation of a ledger including banks, suppliers, transporters and clients could easily solve these issues.

Blockchain technology would allow all the parties to know, in real-time, who has done what, the means of transport, and product location. Additionally, blockchain smart contracts will allow banks to know a supplier’s real-time financial situation, easing their access to short-term loans.

Raising funds to finance business activities could also be done directly through the blockchain community. This process would be the ultimate decentralization of financial and business-related operations.

Furthermore, according to a Harvard Business Review article, counterfeit products would decrease with smart contracts since every item in the market would have a transactional hash or ID.

Overall, and once all the parameters are decided, smart contracts for the supply chain have the potential to save both time and money.

In the recruitment process, blockchain also has a role. There is a growing interest to use the technology to verify credentials by having ledgers where companies and schools can certify people and their achievements. This brings up questions regarding privacy, particularly how much personal information should be available – even though people frequently post lots of information about themselves unintentionally across the internet.

And while artificial intelligence may be of more use in recruiting per se, smart contracts could revolutionize the payroll process.

Last but not least, new forms of firms could be created. Instead of having individuals running companies, a set of smart contracts is coded and run autonomously. The more members buy tokens and hold them, the more voting rights they acquire. This community decides what, when and how the organization operates.

The main use of DAOs today is through decentralized finance (DeFi), with organizations allowing people to invest, trade or borrow funds such as Uniswap. Others, such as BItDAO, allow people to fund and create their own DAOs and be financed should the project be approved by the members. They offer possibly unlimited opportunities for businesses to both interact and raise funds.

The downside of those protocols is the security issues inherent to them. Smart contracts are the gateway for malevolent individuals to get into crypto enthusiasts’ pockets. The famous Ethereum hack of 2016 was done through an improperly coded contract, allowing cyber thieves to steal $150 million USD worth of tokens from investors.

This led to a hard fork, an operation in which a second blockchain universe was created but as a backup version from before the hack happened. This allowed the victims to get their tokens back but raised concerns about the supposed immutability of the blockchain ecosystem.

If the current trend for business and finance continues to shift towards a blockchain-governed era, many sectors could be transformed, requiring workers and employers to adapt. Education systems around the world should include more IT, coding and blockchain courses. The job areas cited in this article are just a glimpse at all the opportunities that the crypto world is offering.

As for accounting, the challenge is mainly the legal aspects inherent to transactions. Blockchain allows people to financially interact off the standard system and smart contracts should be overviewed by lawyers to make sure they operate legally. Government should also pass laws to render those contracts binding.

We are just at the dawn of this new age and many things should be re-arranged at different levels (societal, personal, educational) for blockchain technology to flourish.

Introduction to Blockchain I: All that glitters is not gold… or Cryptocurrencies?