Introduction to blockchain I: All that glitters is not gold… or Cryptocurrencies? 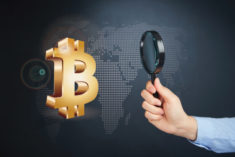 Cryptocurrencies will become the new store of value because of digitalization, artificial intelligence, and a high degree of digital encryption. But there are challenges and environmental concerns…

Since the dawn of recorded time, people have used different means of storing value, such as gold or silver. In our age of digitalization, artificial intelligence, and data encryption, we have new ways to store value.

Let us look at one of these ways; cryptocurrencies. What they are, and how do they work?

I am going to answer these questions in a manner, I hope, an absolute beginner can understand.

We will study the creation system of the most famous crypto, Bitcoin, before talking about some of the challenges associated with cryptocurrencies, notably in the job market.

Bitcoin is a ledger of recorded encrypted transactions. For the more curious, this is done via SHA 256 encryption.

The encryption is done by state-of-the-art computers (generally Asics) specially dedicated to algorithm calculations, but in certain cases, even smartphones can be used.

With every new financial operation, these computers (miners) compete to encrypt a new block (thus the term blockchain) and obtain a new hash for the transaction. The user then gains crypto-monetary compensation for it.

An example of data encryption via Secure Hashing Algorithm 256 (SHA 256) and the computed result.

It decreased every 4 years until 21 million bitcoins were created and in circulation.

The process of reducing the compensation for mining is called halving (or halvening), allowing bitcoin to gain in scarcity and avoid inflation.

As for the market value of the cryptocurrency, the supply and demand rule applies. We must thus make a distinction between what Bitcoin is (that is, nothing more than data on encrypted ledgers) from its price. We usually expect the money we have in our bank accounts to be convertible into tangible bills and coins. In the case of bitcoin, it is purely virtual and digital.

What are the benefits of cryptocurrencies?

The main argument for using Bitcoin is to decentralize our monetary system and escape from all the high inherent fees. Furthermore, Bitcoin allows anyone (though pseudonyms are used) to participate in the network through “mining“.

Furthermore, the transactions can be done quickly (approximately 10 minutes) from and to anywhere on the planet.

We usually expect the money we have in our bank accounts to be convertible into tangible bills and coins. In the case of bitcoin, it is purely virtual and digital.

What are the disadvantages of cryptocurrencies?

Opponents of cryptocurrencies claim that BTC is widely used by criminals.

The encryption characteristic of the crypto renders all the network members ghost-like figures. Even to this day, the creator of the BTC’s identity is unknown. All we know is him pseudonym, Satoshi Nakamoto. The data is encoded to such an extent that reverse computing to get the original information is said to be practically impossible.

The anonymity of the transactions, therefore, coupled with the absence of state regulations, allows the token owners to easily launder money. Through a set of smartly created techniques, criminals can easily get around legal procedures to purchase illegal items as well (drugs, weapons but also money from kidnapping).

The biggest issue regarding bitcoin is the environmental impact of mining. The high level of competition between minors leads to the creation of mining farms whose energy consumption is phenomenal. The computers originally used for crypto mining are also growing obsolete, creating a large bio-electronic waste problem.

The revenge of centralization

The last challenge posed by cryptocurrencies is the de facto inaccessibility of the system to the majority. On the one hand, not everybody is updated with the latest innovations in blockchain, let alone in technology. Secondly, the cost associated with mining is very high (including training courses, hardware and energy).

The initial goal was to render the ecosystem accessible to anyone, but we can easily fall back into a centralized environment. This time around though, it would not be led by governments, but by the wealthiest and most versed in hi-tech.

To put it in a nutshell, blockchain offers a safe and secure alternative platform for transactions on a worldwide scale. Nonetheless, the absence of regulations and the environmental impacts remain a challenge for the future. The blockchain universe also brings up challenges in many employment sectors, such as accounting. For example, how can completely anonymous and encrypted operations be accounted for in financial statements?