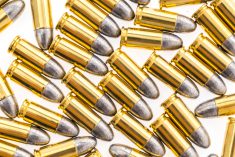 Swiss companies can now sell arms to countries experiencing civil conflict, following the relaxation of government regulations. Although sales would only be allowed if the arms were not used in the civil conflict, many critics doubt that this restriction could be enforced.

Controlling who ends up with military hardware is very difficult. SonntagsBlick recently reported that Swiss hand grenades, which were part of an arms shipment sold to the United Arab Emirates in 2003 by the Swiss state arms maker RUAG Holding, ended up in the hands the Islamic State.

Last year, Swiss companies exported 446.8 million CHF of armaments to 60 countries, up 8 percent from 2016. Fifty percent of sales went to other European countries, which represents a loss of market share by two percent compared to 2016. Swiss arms’ exports rose, however, in the Americas and Asia.

Some argue that the relaxation of the regulations is necessary to help protect Swiss jobs in the country’s arms industry, whose strength is seen as crucial to protect the country in a military crisis.

Arms’ manufacturing is facing other issues, particualry stemming from actions by the United States.

For example, Reuters reported that the French Minister of the Armed Forces, Florence Parly, said recently that France should cut its dependence on US components used in French-made weapons systems. The Minister was alluding to the fact that French SCALP cruise missiles could not be sold to Egypt since they contain parts made in the US and thus were under trade restrictions imposed by Washington.

Parly was quoted as saying “We have had trade difficulties linked to the prospects for exports. And we know that these difficulties are linked to strategic questions and often to problems of commercial rivalry.”

I am a cognitive psychologist finishing my thesis at the University of Geneva about human working memory. The understanding of how the human brain processes information has far-reaching consequences for the way we organize parts of society.

I am particularly interested in how cognitive psychology and neurosciences can explain human behavior. I aim to use recent research in this field to achieve meaningful durable change in society.