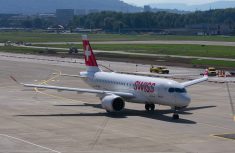 Long known for offering flights at a premium, SWISS is now competing with low-cost airlines like Easyjet for short-haul trips.

According to Le Matin, the average price for short-haul trips goes down by an average of six percent per year.  As a result, SWISS has installed between 12 to 19 extra seats in its Airbus A320 and A321 aircraft in 2014, allowing it to compete with low-cost airlines in terms of pricing.

Offering low-cost flights also means that SWISS has had to adapt to a low-cost way of operating.  The airline offers a ‘Light’ fare, which is their cheapest option amongst other types of fares, but it also means that you will have to pay for snacks and checked in suitcases; SWISS’s traditional chocolate bar is still complimentary.  Although the ‘Light’ fare is mostly offered on short-haul flights, it can also be applied on their Zurich to New York flights.

Despite being able to compete with low-cost airlines, SWISS doesn’t consider itself a low-cost airline; saying that it not only focuses on clients wishing to travel at a low cost but also on clients willing to pay a premium for a better flying experience.  SWISS also points to the fact that they have invested heavily in airport lounges for their business and first class customers.