A report published by the Swiss government claims that the ecological footprint of Switzerland is about 3 times bigger than that which can be sustained. The report entitled “Switzerland’s ecological footprint – A contribution to the sustainability debate” uses the methodology known as the Ecological Footprint approach. It finds that the biocapacity of the country is 1. 6 global hectares per capita, far less than 4.7 used per year. Biocapacity is the capacity of an area to provide resources and absorb wastes. For decades, the footprint has exceeded its sustainable level and according to the report, this is mainly due to the increase in energy consumption which accounts for two-thirds of the footprint. While energy consumption is the largest single contributor to the increasing footprint, use of cropland, forests and green space are also important, together accounting for 26 percent of the total. The report produced by four branches of the Swiss government – the Federal Office for Spatial Development (ARE), the Agency for Development and Cooperation (SDC), the Federal Office for the Environment (FOEN) and the Federal Statistical Office (FSO)-  points out that Switzerland is increasingly importing biocapacity and exporting waste products, such as carbon dioxide (CO2). As the purpose of the report is to contribute to the debate on the greening of the Swiss economy, it lists a number of possible actions that could be taken to increase resource efficiency. Increasing prices on fossil fuels and an increased focus on developing new technologies are among its suggestions.

You can find the report here: 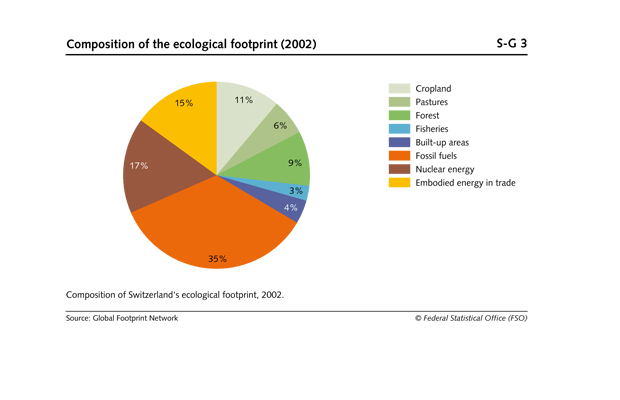