Always thank your recruiter after an interview. Sending a message of thanks can help you t

Tesla stocks fall after asking suppliers for cash back 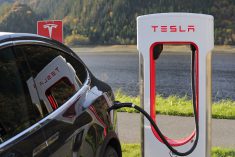 Tesla stocks fell by more than four percent on Wall Street, after the electric car company asked some of its suppliers for cash back, a move that would help them return to profitability.

The move can be seen as a sign of the company’s financial reserves running low, following ambitious production targets of their new Model 3. However, Tesla says that they have asked fewer than 10 suppliers for refunds and that they were from projects that began in 2016 and have yet to be completed.

For the first trimester of 2018, Tesla reported a loss of 709.6 million dollars, but claim that they will be profitable in the third and fourth trimester. With the company burning through their capital at a high rate, the company announced in June that they were going to cut jobs; approximately 9 percent of salaried employees, but none from production lines.

This comes after yet another fall in share values; a result of the company’s CEO and founder, Elon Musk, sending out a controversial tweet – causing shares to drop by 3.5 percent.

While Tesla is a small company in comparison to car manufacturing giants like General Motors, Ford, and Volkswagen, it is seen as the company that truly put electric cars into the mainstream. Tesla currently has 14 stores in Switzerland, and about 19 supercharging stations distributed across the country.