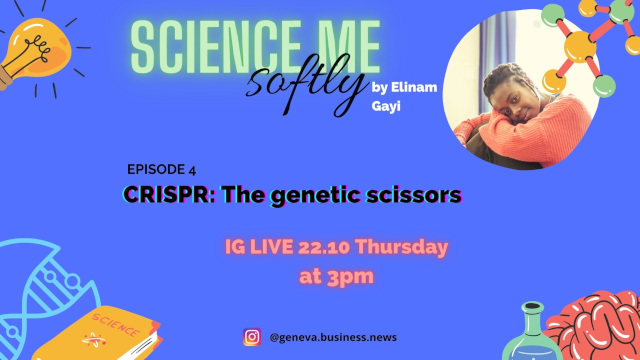 Thursday 22 October at 15.00, our resident scientist Elinam Gayi is hosing an IGLive talk on the genetic scissors or CRISPR. Elinam is a young scientist who takes scientific research and presents it in an interesting, engaging, and accessible way.

On the 7th of October this year, the Nobel prize in Chemistry was awarded to Emmanuelle Charpentier and Jennifer A. Doudna for the development of a method for genome editing. This method is called CRISPR. And now everyone wants in! People are using it to try and make crops that are climate resilient; to engineer algae that can produce biofuel, and even to detect and treat COVID19!

So, what is this amazing technology, how is it currently being used and what are the implications for the future?

Just like us, bacteria can be infected by viruses. However, some bacteria have evolved to defend themselves against such infections using the CRISPR system.

This system allows them to cut the DNA of viruses. Much like our own immune system, CRISPR allows bacteria to keep a memory of viruses that have previously invaded them. The bacteria then keep these memories in the form of snippets of DNA that, in the future, allow them to specifically detect, recognise, and destroy the DNA of invading viruses. In other words, it is similar to the way our bodies produce antibodies.

Charpentier and Doudna were able to recreate these “genetic scissors” in a test tube and prove that they could be programmed to cut DNA at any given site.

How can we use CRISPR?

The applications of CRISPR technology are vast. It can not only be used to cure genetic diseases and prevent the spread of transmissible ones, but it can also be used in the agricultural and food industries to increase production and make crops drought-resistant. With such a wide range of applications, there are many technical and ethical concerns when it comes to the use of this technology.

Using CRISPR we now have the ability to modify our genome. But, where do we draw the line between therapy and enhancement? And what will be the implications for future generations?

For a live discussion on CRISPR, visit us on Instagram @geneva.business.news Thursday 22 October.

Blood diagnosis: A new tool against cancer by Marion Tetafort

The use of recreational drugs in therapy

Science concerns all of us and I can help you communicate about it.
I am a scientist who can take your data and present it in an interesting, engaging and accessible way. Whether it be through writing an article, preparing a poster or simply an oral presentation, I can contribute to scientific expertise by presenting to experts or increase awareness of current research by presenting to the general public.
In addition to being a scientist I am also a photographer, which means that I like to look at things from different perspectives, and this makes everything a lot more fun!